Sarma, Dash, and Ghormade: Death following accidental compression of neck by safety harness: A case of fall from height

Death following accidental compression of neck by safety harness: A case of fall from height

Work related fall from height many a times causes fatal injuries and death amongst working in various construction sites. It leads to different types of fatal bodily injuries including spinal injuries causing economic burden to the family. Although, they have been provided with protective gears and proper training for its use; it has been observed that workers are not using these in a proper ways. They eventually met with accidents which can easily be prevented. Accidental compression of neck by safety harness following fall from height has rarely been described leading to death of the individual. A case was brought for autopsy following accidental compression of neck structure causing fracture of cervical spine and transaction of spinal cord. In this paper, the case has been described with its autopsy findings.

Injury related to ‘fall’ occurs after landing due to slipping, tripping, stumbling, collision, or after descent from high altitude, such as furniture, ladder, scaffold, building, work area, or other elevated place. It results in high mortality and morbidity in general population causing a burden to the family.1 Work related falls from height remains a significant problem among workers working in construction sites. Many a times, there is either death or poly-trauma to the patient following such incidences. These types of incidences can be correlated with either biomechanical or psychological factors of the site. Here, experience, fatigability, assistance of the victim plays a major role.

In 2013, the World Health Organization published International Perspectives on Spinal Cord Injury, which defines falling above 1 meter as high fall, and below 1 meter was as low. Most of the injuries to neck are related to direct impact or transmitted force following fall resulting in spinal cord injury. However, we received an extremely rare case of injury to neck where the safety harness used by the victim was stuck into an iron ladder during his descent causing constriction around the neck structure and violent hyperextension alike long drop hanging. The case has been described along with the autopsy findings with relevant literature of review.

Deceased was a 32 years old person working in an under construction building in the premises of a tertiary care center of Raipur, Chhattisgarh. On the day of the incidence, he was doing some cemented work in the 3rd floor. As per the statements of other workers who were also working on the same floor but not alongside, all were wearing the safety harness as instructed by the supervisor before entering into 3rd floor. However, most of them due to reluctant behavior didn’t use it properly. Their main purpose of using it was just to avoid scolding form the supervisor rather than saving lives.

On the day of the incidence (20/9/2017), the victim did not wear the safety gear properly even though he was working in a risky position. He even did not tie the free end of the rope (of the harness) to any fixed object. At around 3 pm his friends saw him suddenly falling down after slippage through the hole of the caged iron ladder. Immediately after fall, his harness strap stuck on a hook of the iron bar of the ladder resulting in violent neck compression and hyperextension with a jerk followed by free fall on a heap of sand. He was immediately brought to the emergency department situated nearby in an unconscious state. However, doctor declared him dead on arrival. Later on, body was sent for autopsy.

The body was brought to the mortuary of the tertiary care center on 20/09/2017 at about 4:30 pm and autopsy was started immediately after receiving the body and relevant documents.

Deceased was an average built, male person wearing a half pants and T-shirt. Cloths were torn at places and dirty.

Body cold on touch, Rigor mortis started developing on the small muscles of the hands, postmortem hypostasis present over back but not fixed. Following injuries were noted over the body: 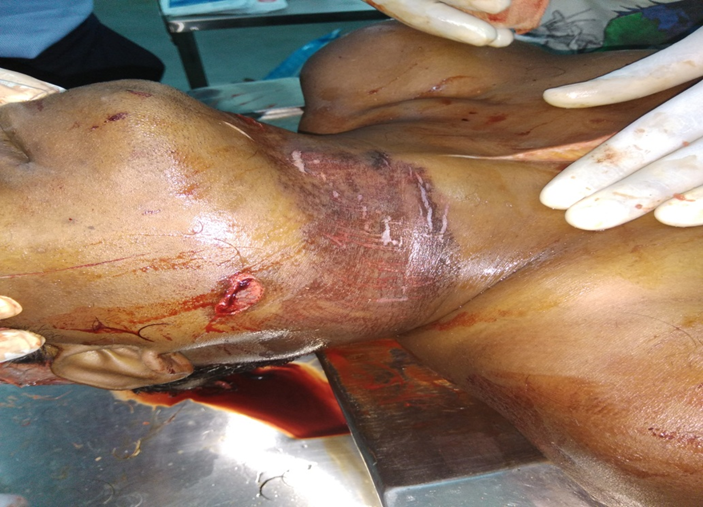 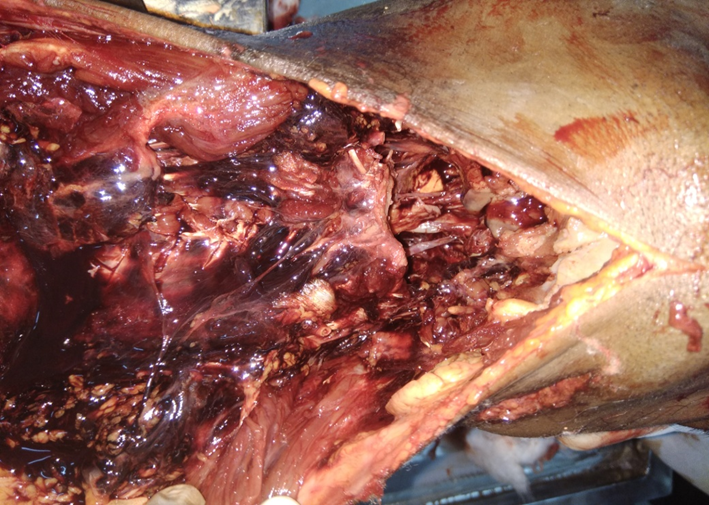 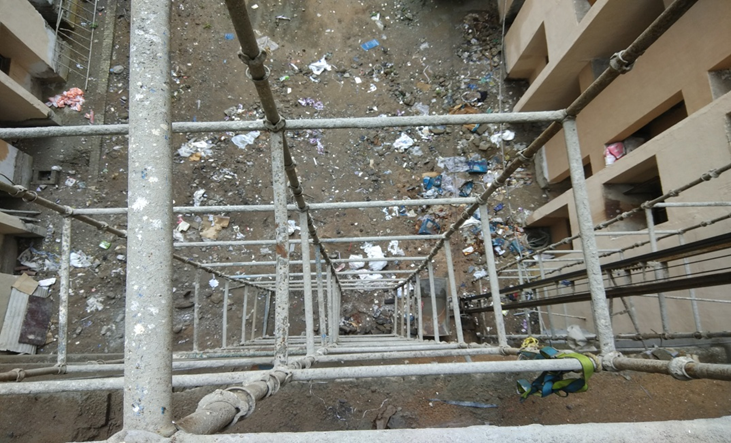 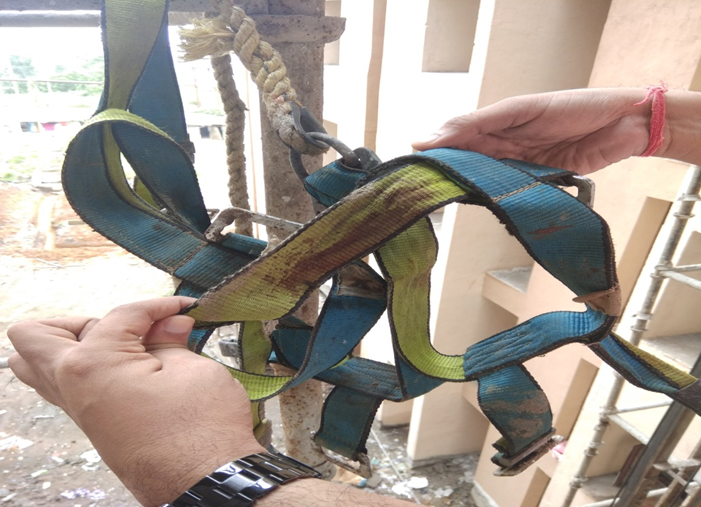 All the internal organs were congested and intact. Stomach contained partly digested food without any suspicious color or smell. Chemical analysis of viscera and blood showed negative result for intake of any poisonous substance or alcohol.

The person died instantaneously following complete transaction of spinal cord due to violent compression around the neck (cause of death). Time since death was approximately 1-3 hours.

Accidental injuries over the neck are mostly seen in persons who are working with some machinery and suddenly cloths entangled within it. These types of injuries are also seen amongst female who are very often riding pillion. Accidental strangulation following these usually never leads to fracture-dislocation of cervical vertebrae, which is common in judicial or long drop hanging.2 However, in some cases of accidental strangulation have been described associated with fracture of cervical vertebra.3 These types of fractures are mostly seen in lower cervical vertebrae. In case of judicial hanging and long drop hanging, there is bilateral avulsion fracture of neural arch of axis with or without its dislocation on third vertebra mostly if the position of knot is sub-mental resulting in sudden extension of the neck.4

Neck injuries are common among victims of fall from height. However, such injuries caused by safety harness among workers who suddenly felt down from height are extremely rare. Safety harnesses are those devices which are made to prevent injuries among workers while suddenly they felt down from height. It is specially designed so that immediately after falling down, the body is decelerated and prevents them from free fall. However, some injuries are reported at the time of sudden deceleration over chest or abdomen. Now days, a new technique has been adopted and a handle grip is given on back of the leg straps on both side so that the person immediately after stoppage can adjust his body by holding on both grips. It gives a “chair on air” position of the individual and gives extra time to the rescue team. It can relieve pressure on the femoral arteries too which was a major drawback in older varieties.5

In our case, the victim felt down accidently from the 3rd floor through the guarded hole of caged iron ladder. The injury pattern and scene visit clearly suggested that he was not wearing the safety harness properly, clips were not zipped up and it was fitted in a loose manner. The rope which connects the harness with some protective material was also without any hook which suggests that it was not tied to any pole. As he was working at the edge, he felt down immediately after losing balance or slippage. Immediately after falling, the front strap stuck on a hook of the ladder. It gave a jerky movement on the neck causing its sudden hyperextension, where constricting force was the weight of the body (like hanging). This sudden movement of the neck with downward force leads to breaking of the vertebral bodies with complete transaction of the spinal cord. Immediately after jerk (complete deceleration of the body), he felt down freely on a heap of sand. The injuries over face can be because of impact on the side bars of the ladder. There were no other fatal injuries except sub arachnoid hemorrhage in the body even after he felt down from the 3rd floor because of cushioning effect of the sand. This type of accidental injuries over neck causing death while falling from height is very unusual and this case describes the rarity of the incidence.

Such a rare type of accidental neck compression was reported in a 42 years old male during autoerotic asphyxia by two branches of coffee tree.6 In another case, a 25-year-old man; who was in a state of morphine-induced central nervous system depression was found dead in a sitting position with the collar of his T-shirt hanging off a jutting-out root of a tree. The hanged collar acted as a ligature compressing the neck.7 Another unusual asphyxia was reported where a person under the influence of alcohol died because of sudden closure of automatic door in a super market. There was an incomplete compression mark around the neck.8 Similar findings were also found in an experienced geocacher who was found suspended from a bridge pillar with his climbing ropes and helmet straps twisted across his face and neck. He had apparently attempted to rappel from a 30-m-high railway bridge to find a geocache. All the sequences of the incidence were later on retrieved from recording of the camera found on the chest strap which helped to reconstruct the whole scene.9

Fatalities following fall from height are reported very often. The type of death following fall from height as described in this case is extremely rare. Hence, it becomes a hard job for the autopsy surgeon to deal with such type of cases especially with respect to the manner of death. Hence, along with through autopsy, crime scene visit also carries added circumstantial evidences.

Fall injuries are always preventable. Most of these fall accidents can be prevented through compliance with the amended regulations. Moreover, knowledge about the main causative or initiating factors leading to fall incidents is desperately needed for fall prevention intervention. Periodic training of all the workers for proper use of safety gadgets along with its strict implementation is the only way to decrease these fatalities.

Chad Lingerfelt. After a fall from height. Safety+Health2019https://www.safetyandhealthmagazine.com/articles/19218-after-a-fall-from-height

AN Vadysinghe M Sivasubramanium RP Jayasooriya A tree branch instead of a ligature: an unusual accidental hangingForensic Sci Med Pathol20171344413