NGONGANG, BIGOT, NSEME, SOUMAH, and SANDO: Homicide and corpse dismemberment: A study of one case

Homicide and corpse dismemberment: A study of one case

Homicide may be an isolated impulsive act arising from a situation or based on a previous conception, which is premeditation. Despite its nature or motivations, homicide remains a wrongful criminal act at all times and in all places. Several studies conducted in Western countries on this topic have highlighted the overriding concern of the criminal, which includes concealing the criminal offence in most cases.

In Africa, apart from cases of infanticide, the discovery of the body of a homicide victim in a public place is a relatively common phenomenon, particularly if it involves mutilation.

The body was examined; it was a young adult African female whose corpse was wrapped in a plastic bag. The autopsy established that the section or cutting planes were preferably lodged in the large joints.

Death was caused by mechanical asphyxia. The focus of this case lies in the atypical nature of this type of postmortem manipulation in the West African context.

The unusual nature of this type of homicide illustrates and underscores some reality in our development context.

Homicide is a wrongful criminal act likely to be perpetrated at any time and in any place. In most cases, the criminal’s major concern is concealing his act.

Dismembering is fragmentation or disintegration of the body or parts of the body. 1, 2 To commit this misdeed, aggressors use sharp items of all kinds (a saw, knife, cutlass, etc.); it may consider articulations (disarticulations). Depending on the purpose and motivations behind a homicide, a distinction is usually made between ,“defensive mutilation”, the reason for which is to dispose of the body and/or make its identification more difficult; “ײaggressive mutilation,״ in which the murder and mutilation are caused by indignation;

In West Africa, there are very few dismemberment cases. We report one case in which a corpse was discovered alongside the corniche of Dakar. Examination of the body and forensic autopsy helped identify the motives behind the dismemberment.

A plastic bag containing one dismembered body was discovered by a fisherman on a beach of Dakar. As soon as he was informed, the public prosecutor at the magistrates’ court of the Dakar region ordered an investigation.

As part of this investigation, the judge sent a request to the medical examiner. Then, examination of the body was followed by a forensic autopsy.

Examination of the body

Different segments of the body

Different segments of the body 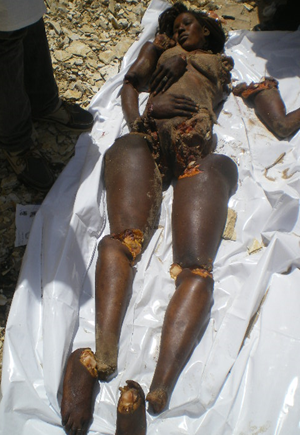 During the actual autopsy (Figure 3), crime scene reconstruction was performed. The pieces of body were in a good state of conservation. Dermabrasions were identified at the chin level. Section planes did not present bruising or ecchymosis; they respected the articulations, thus mimicking real disarticulations.

External examination on the autopsy table 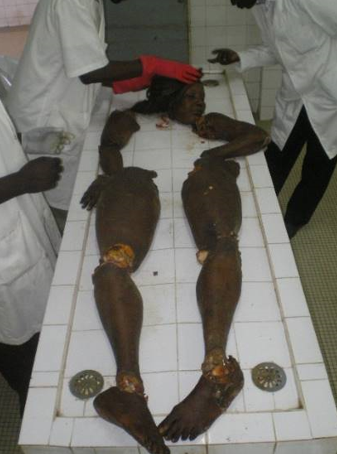 The costosternal breastplate was opened, and the left lung presented with ecchymosis lesions (Figure 4 ). These injuries were compatible with mechanical asphyxia. 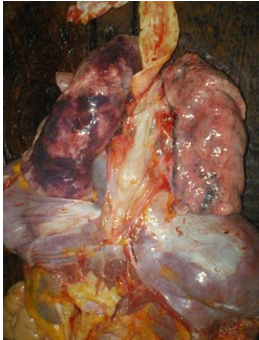 At the digestive system level, the gastric contents consisted of food. We did not note any damage to the mucosa. The rest of the examination did not show other traumatic injuries or abnormalities likely to be lethal.

The autopsy revealed a violent death by mechanical asphyxia, specifically involving suffocation. The absence of ecchymosis in the section planes indicated that dismemberment had been done after death.

From a forensic point of view, there was no doubt about that the death was criminal.

Dismemberment is a procedure that an aggressor uses to cut up the human body into many fragments for various reasons. This term does not apply when body parts are separated during a traffic accident or explosion. Corpse dismemberment is a punishable offence distinct from homicide because it breaches the inviolability of and respect due to human remains.6

The concealment of a dead body seems to be the main purpose; this is done to impede the identification of the victim. Most dismemberment procedures reported by Konopka and Rajs7 show defensive mutilation. By cutting the corpse, the aggressor is mainly motivated by the necessity of removing the body from the location of the homicide. This also specifies the typical postmortem nature of dismemberment.

The analysis of the aggressor profile allows us to argue that in most cases, the murderer is someone known by the victim.1, 3 This proximity is a reason for criminal mutilation.3

The use of sharp items is necessary (a kitchen knife or cutlass); this case is a perfect illustration. Some authors have also reported the use of a chainsaw8 or sharp items and blunt objects. According to Nunzio et al.,9 knives are the most commonly used weapons in cases of offensive dismemberment, and before this type of dismemberment, excess power is usually exerted, thus illustrating the lethal rampage of the murderer.

The cause of death differs depending on the series of events. We referred to our case as traumatic asphyxia. Zerbo10 specifies in his case that death resulted from traumatic brain injury (TBI) caused using sharp items and blunt objects.

Dismembering corpses is a highly uncommon procedure in West Africa; however, it is often the result of an attempt to hide a dead body after homicide. This mutilation usually happens where the murder took place without any prior planning by the aggressor, and in most cases, mutilation is practised as a postmortem procedure.

The authors of this paper hereby certify that they have no affiliations with or involvement in any organization or entity with any financial or non-financial interest.