An outbreak investigation of dengue in medical students and health care workers in a tertiary care hospital, Pune

Background: Dengue is fast emerging mosquito borne viral disease. There was sudden outbreak of dengue cases among Medical students and Health Care Workers in tertiary care hospital from September to November 2019. Therefore, outbreak investigation carried out and corrective actions taken to halt the outbreak. Study Objectives are to investigate outbreak of dengue cases in medical students and Health Care Workers and to take corrective actions to halt the outbreak.

Material and Methods: The outbreak investigations of Dengue cases was done as 28 cases were admitted which includes medical students and Health Care Workers in tertiary care hospital from September to November 2019. A thorough search for breeding sites of Aedes mosquito was done in premises of hospital, college and residential area. 5 teams were made consisting of Sanitary Inspector, interns, resident doctors and lecturer. House to house surveys were done for container index in Resident quarters and employees quarters. Health education on prevention of dengue was given to Medical students and Health Care Workers including interns, resident doctors, undergraduate students. Antilarval measures like abating, fogging and spraying of oildone.

Conclusion: With the corrective measures taken, no new case of dengue was notified in November 2019 among Medical Students and Health Care Workers.

Dengue is one of the most rapidly spreading mosquito borne viral disease and is endemic in many countries in the tropical and subtropical regions of the world.1 In the first report of the World Health Organization(WHO) on Neglected Tropical Diseases (NTDs), dengue was listed as one of the NTDs by the WHO.2 Globally 390 million dengue virus infections per year of which 96 million manifest clinically. In India, there were 136422 cases and 132 deaths due to Dengue in 2019 while in Maharashtra there were 12374 cases and 25 deaths.3

Dengue viruses (DV) belong to the family Flaviviridae, and there are four serotypes of the virus referred to as DV-1, DV-2, DV-3 and DV-4.4 Anti dengue IgM detection using enzyme linked immunosorbent assay (ELISA) represents one of the most important advances and has become an invaluable tool for routine dengue diagnosis.5 Specifically, MAC ELISA (IgM antibody capture ELISA) diagnosis is based on detecting dengue specific IgM.6

This was a tertiary health care center catering to whole of the Western Maharashtra area. Around 150-200 postgraduate students and 250 undergraduate students were admitting to this Institute per year. Increased no. of dengue fever cases were reported among the medical students and health care workers of this Institute in the month of September to November 2019 which warranted this outbreak investigation. There were total 94 medical students and Health Care Workers found positive for dengue.

So the present study planned to investigate outbreak of dengue cases in medical students and Health Care Workers in a Tertiary Care Hospital.

Outbreak was investigated by comparing the dengue positive cases of year 2019 with the previous year’s data. There were 7-8 cases in the month of September 2018, 3-4 cases in the month of October 2018. But there were 94 dengue positive cases seen from September 2019 to November 2019 among the medical students and health care workers. Hence the outbreak of dengue was confirmed. Outbreak investigation was done among medical students and Health Care Workers working in a Sassoon general Hospital suffering from dengue fever from September 2019 to November 2019.

Medical students and Health Care Workers who were tested positively for NS-1 Antigen and IgM were included in the study while patients other than medical students and Health Care Workers were excluded. Records were reviewed and information on the date of onset, sociodemographic characteristics, serological reports for confirmed dengue cases from September to November 2019 was collected.

Environmental survey was also done. In that, sanitation practices of the residents, their water storing habits, mosquito breeding sites, and drainage system was observed.

Any case of fever of 2 days or more with two or more of any of the following: headache, retro-orbital pain, myalgia, arthralgia, rash, hemorrhagic manifestations, and leukopenia.7

Any suspect dengue case with one or more of the following: positive monoclonal IgM antibody capture-ELISA (MAC-ELISA) test in a serum specimen from the late acute or convalescent phase, or positive NS1 ELISA test in acute phase.7

Permission of Institute Ethical Committee (IEC) was taken. Ethic’s Committee no. is BJGMC/IEC//Pharmac/ND-0720109-110 dated 24/09/2019. Full confidentiality of respondent’s information was kept and information was used only for research purpose.

Finding of cases was done by reporting the patients who had fever, joint pain.

Tracking of the cases were done to avoid the repetition of cases.

Total 94 Health Care Workers were positive for dengue. Of which 28 were admitted in the hospital and 66 were treated on OPD basis. 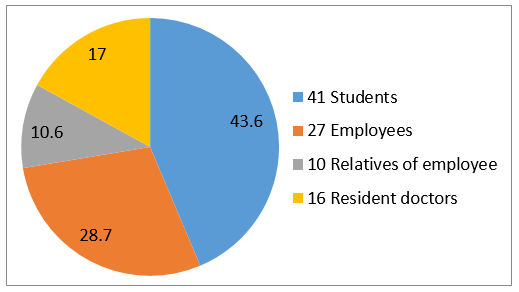 Week wise distribution of no. of dengue cases among Health Care Workers in a Tertiary Care Hospital in month of September to November 2019 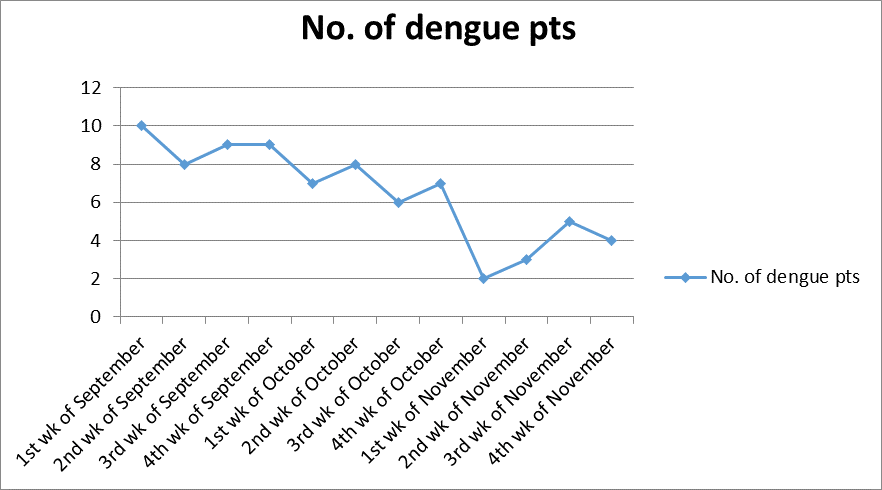 Maximum number of cases were observed during the month of September 2019. (Figure 2)

Age and sexwise distribution of patients

Out of 22 patients having thrombocytopenia, platelet transfusion was done to 4 patients.

Mean duration of stay in the hospital was 4 days. 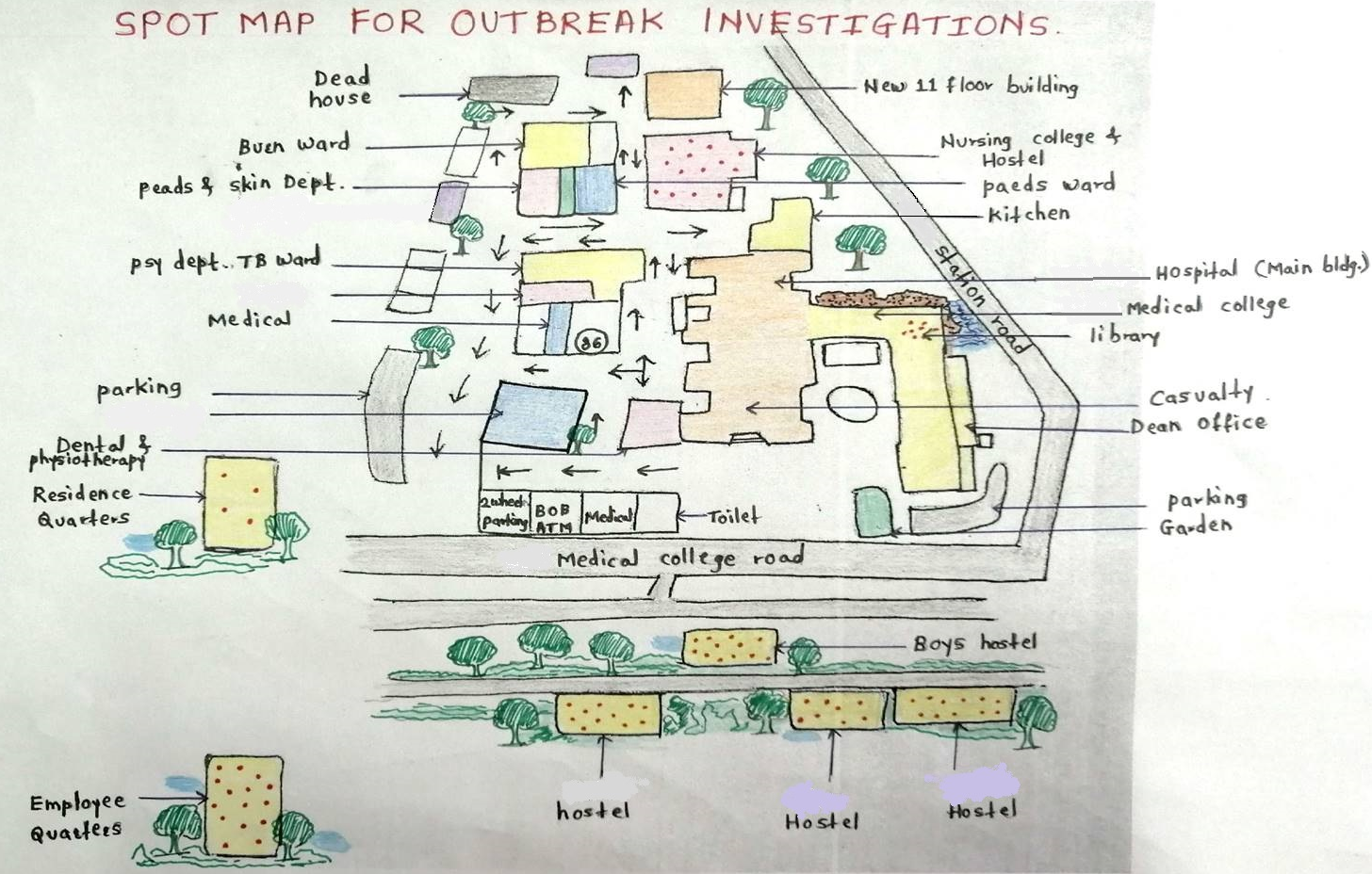 In the Spot map(Figure 3), Dengue cases were marked as red dots and clustering of cases were seen near the sites of breeding of Aedes larvae.

The maximum number of dengue cases were found during the month of September 2019 to November 2019. The last case of dengue was reported in Mid-November. After taking all the corrective actions the cases drops down and the dengue outbreak was declared as end of outbreak.

Total 94 Health Care Workers were positive for dengue from the month of September 2019 to November 2019. Maximum number of cases were observed during the month of September. There was an increase in the number of samples received in the post monsoon period (September to November).8 Investigations were done to confirm the outbreak of dengue. Whole area of hospital, college, hostels, resident and employee quarters were distributed among various teams. Thorough search for breeding sites was done. Anti-larval and Anti-adult measures were taken to control the outbreak.The age group in this study was 14 to 68 years while age group in another study was 21 to 30 years.9 Also age group commonly affected in another study was 21 to 30 years.10 Cases were slightly more in males than females. This observation was similar to study conducted by Bhaswati Bandyopandhyay et al.11 However the study conducted by Sourav Goswami et al.9 showed that female population suffered more than male.

There was sudden increase of dengue cases among medical students and health care workers from September 2019. Therefore outbreak investigation was done in all the premise of Tertiary care hospital including resident’s quarters, employee’s quarters, college area and hostels. House to house surveys were done for searching of breeding places of Aedes mosquito. Water collection sites were also looked. Anti-larval measures were taken in the form of abating using Temephos and spraying of mineral oil. Anti-adult measures were taken in the form of fogging using Deltamethrin (5ml in 1lt. of diesel).

Health education was given to all students, doctors and employees. The breeding sites were observed and proper action were taken. This outbreak has shown that dengue fever can present as a sudden explosive outbreak under appropriate epidemiological setting, especially at an institutional set up. Breeding places of Aedes mosquito can be missed unless looked for in a systematic way. Because dengue fever is known to exhibit severe complications, sometimes culminating in fatalities, all such outbreaks should be prevented and promptly controlled.

There are no conflicts of interest.