Lalhminghlua, Nayak, Saiyed, and Jani: Pulmonary thromboembolism: A momentous event in a case of polytrauma

Pulmonary thromboembolism: A momentous event in a case of polytrauma

Pulmonary thromboembolism (PTE) is one of the momentous events in a case of polytrauma. In majority cases because of sudden commencement, medicolegal autopsy shows insufficient macroscopic confirmation even though thrombo-embolism is the cause of death. During a medicolegal autopsy, the autopsy surgeon, firstly need to differentiate embolus and post mortem clot by gross examination. Histopathological examination (HPE) not only helps to establish emboli but also illuminates associated systemic changes in other organs as well. Most importantly, the correlation of autopsy findings and HPE findings with the clinical events reflected in medical records helps to scientifically explain the series of events during hospitalization. The same data is also useful in better monitoring and management of polytrauma cases in the future.

Thrombosis is the process of formation of solid mass called thrombus in circulation from the constituents of flowing blood whereas embolism is the process of partial or complete obstruction of some part of the cardiovascular system by any mass called embolus carried in the circulation, 90% of emboli are thromboemboli.1 The three primary abnormalities that lead to thrombus formation are endothelial injury, stasis or turbulent blood flow, and hypercoagulability of the blood (Virchow’s triad).2

Venous thromboembolism (VTE) is a life-threatening complication after trauma. It comprises deep venous thrombosis (DVT) and Pulmonary Thromboembolism (PTE) and represents a significant cause of death, disability, and discomfort after trauma-associated hospitalization.3 PTE can cause sudden unexpected death and usually results as sequelae of DVT in the lower limbs or pelvic venous system with non-specific manifestations which makes its clinical diagnosis difficult and often misdiagnosed.4, 5, 6, 7

PTE can lead to legal conflicts between patients and doctors. It was previously assumed that PTE is uncontrollable and doctors often did not face legal responsibility because of difficulty in diagnosing the symptoms. But with appropriate preventive care, early diagnosis, and timely treatment, there is increasing evidence that patients with PTE can survive. An increasing number of lawsuits related to PTE are successfully being brought on and won by the patients.13

A male aged 36 years while driving his two-wheeler motorcycle on a highway met with an accident with a motor car at 4:30 pm on 15.12.2019 and sustained polytrauma as a result of the accident. He was shifted to the nearest private hospital for primary treatment and police were informed. He was transferred to another private multi-specialty hospital in an intubated and unconscious condition by ICU on wheels ambulance for further management at 10:50 pm on the same day. For further management at affordable cost, the patient was transferred to GCS Medical College, Hospital & Research Centre, Ahmedabad at 6:00 pm on 19.12.2019 by ICU on wheels ambulance in an intubated and unconscious condition.

Complaints of breathlessness and tightness of chest following polytrauma as a result of the accident were enough to clinically suspect pulmonary embolism. On 20.12.2019, USG (abdomen) showed evidence of mild subcutaneous edema along the lateral abdominal wall and lower abdomen. A very limited doppler evaluation of the left lower limb due to dressing materials indicated subcutaneous edema which was more marked below the knee region. X-ray chest suggested soft tissue opacities in bilateral parahilar region, bilateral haziness in the lower part of lungs and, right costo-phrenic angle blunting. At around 9:00 am on 20.12.2019, external fixation of the left femur and left tibia fracture was done by orthopaedic department under high risk consent. On 21.12.2019 at around 10:30 pm, the patient developed bradycardia followed by sudden cardiac arrest. After fruitless CPR, the patient was declared dead at 11:25 pm at night. A medicolegal autopsy was conducted on 22.12.2019 by Forensic Medicine Department, GCS Medical College, Hospital & Research Centre.

Multiple stitched wound, graze abrasions and, contusion were present over the left lateral side of the face, lateral side of left forearm, left arm, left wrist, left palm, left lateral side of chest and abdomen, left thigh, left knee, left leg and left sole. Multiple therapeutic penetrating wounds were present over the lower 1/3 part of the left thigh, left leg and left foot as a result of the external fixators (Figure 1). The right radius showed comminuted displaced fracture on the distal shaft extending to the distal metaphyseal region, left femur showed a comminuted displaced fracture of midshaft with posterior displacement of the distal fracture fragment. Mild adjacent soft tissue swelling surrounding the site of the fractures was seen.

The left tibia and left fibula showed a comminuted displaced fracture at the upper and lower third with mild adjacent soft tissue swelling. Pelvis showed a comminuted displaced fracture of superior and inferior pubic rami on the left side. A linear fracture was seen on the medial wall of the right acetabulum. No any injury was present underneath the structure of the scalp. The brain was congested and its covering was intact, CSF was clear, and weighs 1190 grams. No any injury was present in the structure of the neck. All ribs were intact, pleura was intact, the right lung weighs 1405 grams and the left lung weighs 975 grams. In the right lung, the pulmonary vein showed the presence of a clot. Cylindrical, firm emboli (likely to be fat emboli) was present in the right pulmonary artery (Figure 3). In the left lung pulmonary vein showed the presence of a clot. Both lungs were edematous, on cutting of it red colour frothy fluid mixed with blood was coming out. The weight of the heart was 385 grams and dark red soft jelly-like blood clots were present in the heart cavity. A dark red soft jelly-like tubular-shaped blood clot was coming out from the arch of aorta (Figure 2). The right and left ventricular free walls respectively measured 1.6 cm (normal 0.5 cm) and 2.3 cm (normal 1.5 cm). All coronaries were patent and large vessels were filled with the dark red soft jelly-like blood clots.

The liver was enlarged and weighs 2710 grams, the surface was yellow stained, parenchyma grey and firm. The gall bladder was filled with sludge material. The right kidney weighs 190 grams and the left kidney weighs 225 grams, on cut section of the kidney, red colour blood clots were present. Both the kidney surfaces were smooth, cut surface showed tan parenchyma with a clear demarcated cortico-medullary junction. The spleen weighs 300 grams, the outer surface showed capsulated and multiple infarcts ranging from 0.7 cm to 2.2 cm in size. The left calf muscle on dissection showed brownish red ecchymosed tissue around fracture sites.

The following organs were preserved for the histo-pathological examination: 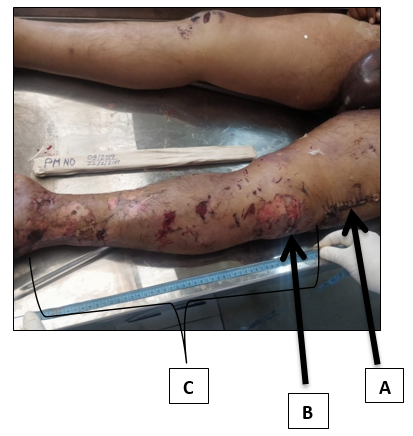 A: Dark red soft jelly like tubular shaped blood clot coming out from arch of aorta 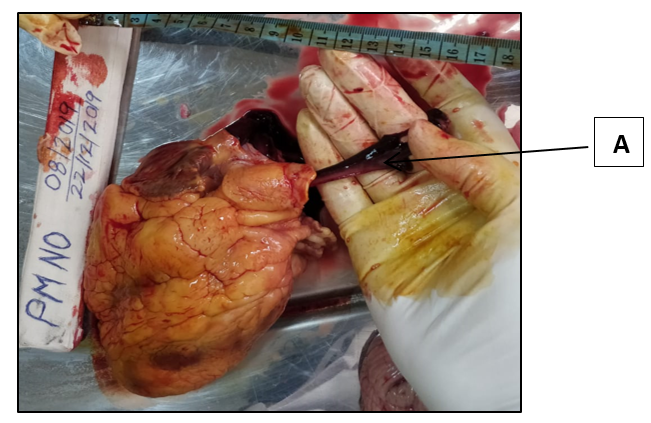 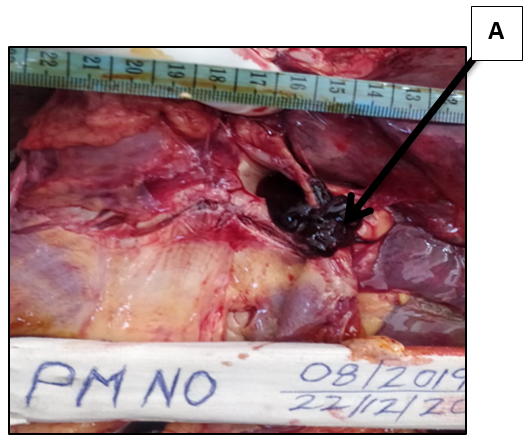 The primary cause of death was given as died due to delayed complications of polytrauma, for further evaluation, viscera are sent for histopathological examination. 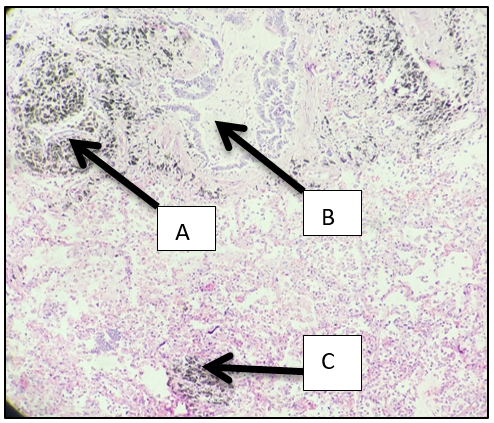 A: Infiltration of inflammatory cell in terminal bronchioles 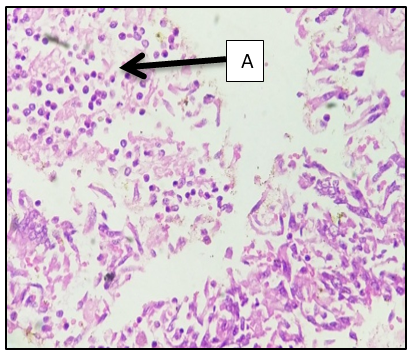 A: Pale pink bands of platelets with fibrin 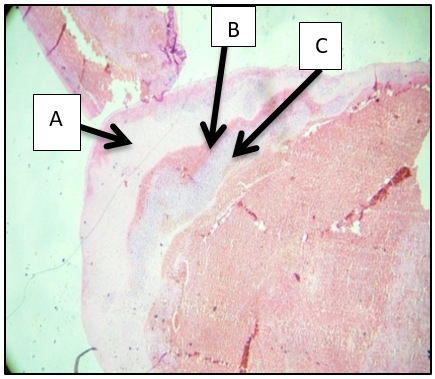 A: Pale pink bands of platelets with fibrin. 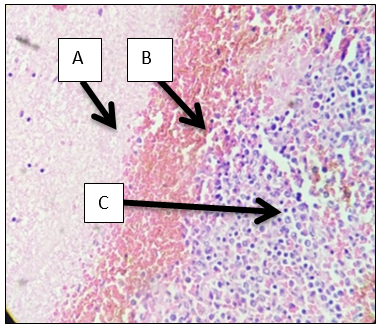 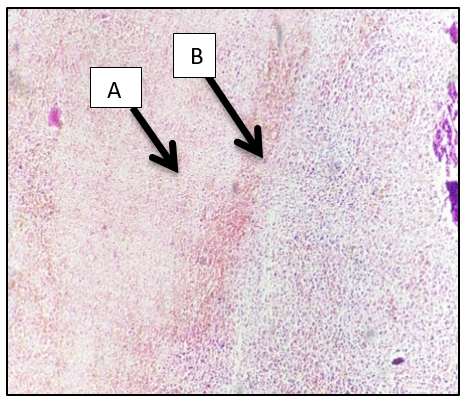 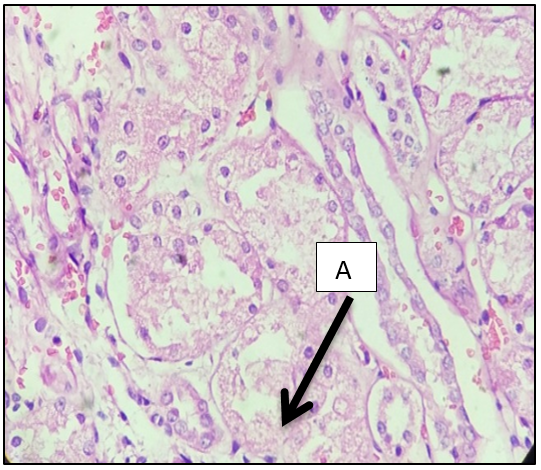 After histopathological reports, the final cause of death was given as died due to pulmonary thromboembolism as a result of delayed complications of polytrauma of limbs. 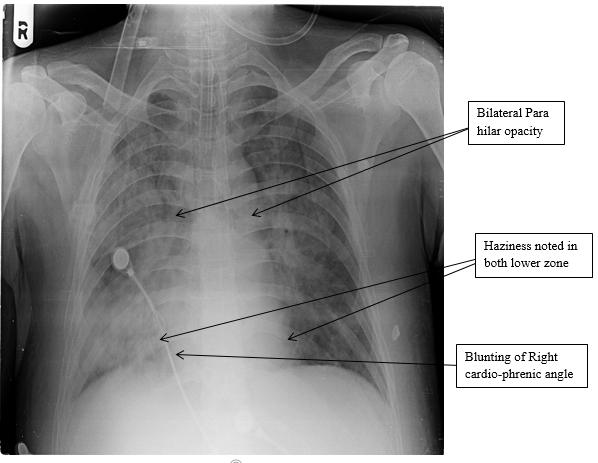 Pulmonary embolism (PE) is a life-threatening condition that is very hard to diagnose due to its unspecific signs and symptoms. It is the most underdiagnosed reason for death where no autopsy is performed and only less than 50% of fatal pulmonary emboli are detected clinically. In case of polytrauma, injury causes hypercoagulation state of blood that leads to thrombus formation in addition to that immobility as a result of trauma especially fracture of lower limbs causes decreased in venous return and which result in development of thrombus of deep veins of the legs which can extend proximally into the popliteal and femoral vessels and become a dangerous source of VTE.14

In the present case, the deceased had multiple trauma including fractures of the femur, tibia and, fibula. Immobility, a major factor apprehending deep vein thrombosis was due to low Glasgow Coma Scale coupled with external fixation of multiple fractures of bones of lower limb and fractures of pubic rami.

The shape and size of the thromboemboli were in favour of its origination from vessels in the lower limbs. Lines of Zahn,15 alternating layers of platelets mixed with fibrin, which appear lighter and darker layers of red blood cells seen on histopathological examination of thrombus confirmed that it is antemortem thrombus, not a post mortem clot. Due to the non availability of phosphotungstic acid- haemoxylin stain (PTAH) and martius scarlet blue stain (MSB) in the laboratory, dating of the thrombus could not be done. Summarily all clinical investigations were sufficient enough to suspect PTE and the same could be confirmed at autopsy and subsequent histopathology examination.

With the advent of 108 emergency services, though a number of spot deaths in road traffic accidents may be declining since they are shifted to hospital but at the same time, delayed causes of death has started surfacing. The case is presented with clinical- autopsy-histopathological details articulated further illuminate the literature. The Ethics committee considered the appeal filed by Sh. Shiv Charan against the order dated 23.11.2012 passed by U.P Medical Council and noted that “delayed thrombosis can occur in pelvic injury, it is known entity and complication of pelvic injury initial examination shows that limb was warm, after 24 hrs limbs became cold. Doppler done and then patient was rightly referred to higher centre. The ethical committee could explain opinion that treating doctor could explain the prognosis of the patient in more effective ways and they should observe the procedure informed information to the attendants in future at the time of admission”, after examining the appeal and the attached documents, the ethics committee sent notice to both parties to file suitable reply to appeal with advance copy.16 At the same time, such cases may also fall under suspicion of medical negligence and, hence a systemic meticulous approach to autopsy and related diagnostic or prognostic investigations can be of great help in addressing such issue independently and of course, clinico pathological correlation can help in reformulating the line of medical management in such cases.