Objectives: To find out the prevalence of undernutrition among 1-5 years children in Urban Ballari.

Materials and Methods: This is a cross-sectional study conducted from January 2018 to June 2018 which included 700 children in the age group of 1-5 years residing in Ballari urban.

Conclusion: The result of the study is indicative of high prevalence of undernutrition among children in the age group of 1-5 years in Ballari City.

"Children of today are citizens of tomorrow", that is why it is very important to ensure proper health facilities as well as adequate nutritional intake for the children. The child population constitutes one of the most important sections of the society. According to 2011 census 13.1% of population in India is between 0-6years of age.1 The growth and development of child is a strong reflection of country's growth and development. Being most vulnerable segment of the society the preschoolers are at greatest risk of malnutrition for it is their growing period that demands high intake of protein and calories.2

Undernutrition starts as early as during conception. Because of extensive maternal undernutrition (underweight, poor weight gain during pregnancy, nutritional anaemia and vitamin deficiencies), about 22% of the infants are born with low birth-weight (<2500 g), as compared to less than 10% in the developed countries. Both clinical and sub-clinical undernutrition are widely prevalent even during early childhood and adolescence.3

Like any other underdeveloped Districts of Karnataka as far as Health indicators are concerned, Ballari is also one of the underdeveloped District located in North Karnataka. Hence an attempt is being made to know the prevalence and determinants of under-nutrition (underweight, stunting and wasting) among children in the age group of 1-5 years in urban Ballari.

To find out the prevalence of undernutrition among 1-5 years children in Urban Ballari.

This is a cross-sectional study conducted from January 2018 to June 2018 which included 700 children in the age group of 1-5 years residing in Ballari urban. The sample size was calculated by using the formula N =z2pq/d2, taking prevalence of under-weight which was 38% according to NFHS data in Karnataka state,6 with a relative precision of 10% of p, the sample size calculated is worked out to be 620, considering 10% design effect, the final total sample size was 620+62=682≈700. Stratified Random Sampling technique was used where in out of 35 wards in Ballari city, 20 children in each ward were obtained by dividing sample size by no of wards (700/35=20 in each ward). A house to house survey was conducted until desired sample of 20 children was achieved in each ward. After taking an informed consent data was collected by personal interview of their parents using pretested semi structured questionnaire followed by anthropometric measurements (height, weight, MUAC) using calibrated equipments.

Socio-demographic profile of the study subjects

Socio-demographic profile of the study subjects revealed 14.3% of children had working parents. Majority 65.2% of mothers had studied 10th standard. Majority of the mothers were housewives/not working (85.4%). Socio Economic Status of the study subjects was revealed nearly 46.4% of the families belonged to Upper lower class (Class IV) and about 38.9% of the families belonged to Lower middle class (Class III), while the upper middle class constituted only 13% and the upper class was only 1.7%. (Table 2)

Nutritional status of children based on WHO standards 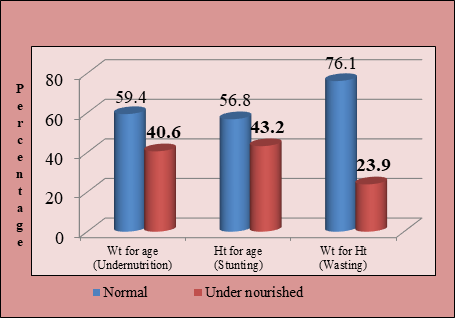 In other studies done in Maharastra by Purohit et al. and Karnataka by Nayak K R et al also reported a slightly lower prevalence of undernutrition, stunting and wasting 38%, 40%, 16% and 37%, 38.2% and 23.7% respectively compared to the present study.8, 9

Another study done by Meshram et al. in Surat region, Gujarat, India reported a higher prevalence of undernutrition, stunting and wasting to be 44%, 39% and 22.5% respectively compared to the present study.13 Very high prevalence of undernutrition 63.16% was reported by Shreyaswi et al. in their study done in Mangalore.14 Similar higher prevalence was reported by few other studies done in rural Bangalore by Bobby Joseph et al which found that about 70% of the children were malnourished, similarly a study done by in a city of Rajasthan found the overall prevalence of underweight, stunting and wasting among the under five children to be 66%, 42% and 30% respectively.15

The result of the study was indicative of high prevalence of undernutrition among children in the age group of 1-5 years residing in urban wards of Ballari City. Unlike in rural areas, undernutrition is also prevalent in urban areas. Arranging awareness programmes at schools or anganwadies for parents so that they are made aware about their child's nutritional status along with direct intervention strategies with nutrient dense food formulation is need of the hour.