The present study was carried out to examine if Mckern and Stewart method (1957) could be used to assess the age from pubic symphysis of male individuals of the Dakshina Kannada District. Samples of pubic bones were collected from 50 deceased males of known age who were brought for autopsy to the Department of Forensic Medicine and Toxicology at a Tertiary care centre after obtaining a written informed consent from the relatives of the deceased. The analysis showed that the component based method of McKern and Stewart cannot be applied in its original form to the Indian population. The study established that the changes aiding in age analysis were more defined in the younger age groups and were obscured as the age advanced. It is also observed that the changes categorizing the bone in a particular age group commence at a later stage in the present study when compared to the reference study. The likelihood of changes in each component of analysis being more pronounced in early stages are high compared to the older age group. Though analysis of pubic symphysis is useful in age estimation a study in bigger sample size will further prove the above hypothesis.

Identification is the determination of individuality of a person based on certain physical characteristics.1 Establishment of the identity of an individual is of paramount medico-legal significance, and age is one of the primary characteristics used to establish identity.2 The role of Forensic Expert is to help the Law Enforcement Authorities, by deducing a probable age range of the deceased in case of unidentified bodies, skeletal remains or mutilated remains. Patterns of bone growth, development and degeneration are utilized to estimate skeletal age in forensic context.3 Adult skeletal ageing methods have traditionally focused on four main regions: the pubic symphysis, auricular surface, sternal rib ends and cranial sutures.4 The pubic symphysis is one of the most widely used areas of skeleton for age estimation.5 This reliability on pubic symphyseal aging is due to two factors. First, other anatomical sites for age determination have been considered less reliable than the pubis. The second factor that has been responsible for the popularity of pubic symphyseal aging is the clarity and distinctiveness of its age related changes.4 Pubic symphysis is a strong union at the midline between the pubic bones. Modern literature describes this as secondary cartilaginous or fibrocartilaginous joint.6 The age changes at the symphyseal surface were first studied by Todd7 who recorded ten stages of changes and also by McKern and Stewart who described the changes as three components and subdivided the changes in each component into five stages. This study concluded that individual maturational factor or events are highly variable in the chronological age. There is no denying the fact that a remarkable orderliness exists in the progress of maturation.8, 9 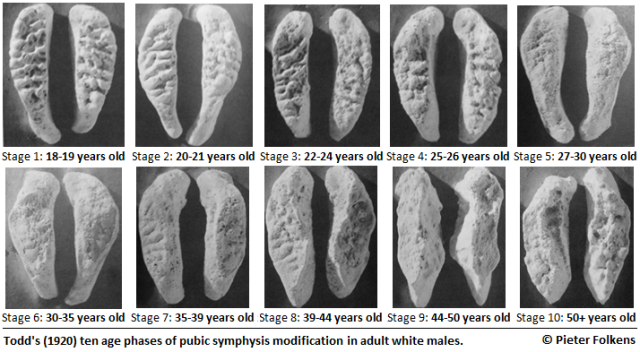 There are very few studies conducted in this region to check the reliability of employing pubic symphysis in age determination regarding the same. Our hypothesis is that the changes in pubic symphysis in younger age is more prominent compared to adult population. Hence the proposed research aims to study the anatomical changes of the symphyseal surface of the pubic bone to know the different changes, in a known age group, in the population belonging to Dakshina Kannada District of Karnataka.

The present research was a cross-sectional study conducted over a period of 18 months. The pubic bones were collected from deceased males of known age (between 18-50 years) and natives of Dakshina Kannada district brought for autopsy to Department of Forensic Medicine and Toxicology. A written informed consent was obtained from the legal heirs of the body at the time of autopsy for the removal of the pubic symphysis. The bone specimen was obtained by extending the “I” shaped incision till the root of penis and cutting the superior and inferior pubic rami using electric saw after the soft tissue in the surrounding area was dissected. The retrieved bone sample was properly tagged with age and date of collection and was buried in the ground at a depth of about 2 feet for a period of 6-8 weeks. The bones were dug out and cleaned. The symphyseal surface was studied for age related morphological changes with a hand lens using the method described by McKern and Stewart.8, 9

The symphyseal surface of the right and left pubic bones retrieved from the individual were analyzed by using the Mckern and Stewart method. The score for each of the component and the total scores were tabulated and analysis was done with the help of Statistical Package for Social Sciences(SPSS) software version 20.0.

The objectives of the study are as follows

The present study was conducted on 50 pubic bones of males between the age group of 18 to 50 years which were brought for autopsy over a period of 18 months. The symphyseal surface of both right and left pubic bones was analyzed in each case using component based analysis devised by McKern and Stewart and age was deduced. The frequency distribution of the samples analysed is depicted in Figure 1. The age range, mean and standard deviation for each of the total scores is shown in Table 1.

Number of cases, age range, mean and standard deviation for the total scores obtained in the present study

Number of cases for total score 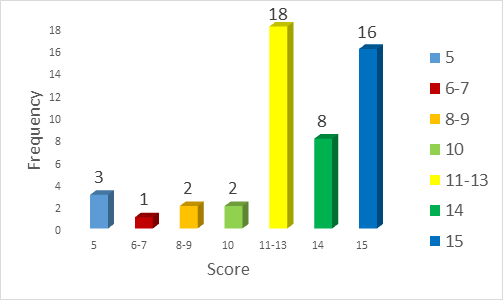 The results obtained from the present study were compared to McKern and Stewart study and other similar researches.8, 9, 10, 11, 12

The findings of the present study are compared with those of McKern and Stewart study as shown in Table 2.

The number of cases, age range, mean age and standard deviation for the total scores calculated in the present and McKern and Stewart study

Number of cases, mean and Standard deviation for each of the total scores of the present study and Sharma G et al's study

It is observed that, the youngest individual in the study is 21 years old in contrast to the McKern and Stewart study where higher number of people are found in the less than 21 years age group. This observation could be attributed to the fact that the individuals dying of unnatural causes were subjected to autopsy as per the rule of the land, in the present study, in contrast to the war dead individuals of the McKern and Stewart study. It is also observed that the changes categorizing the bone in a particular age group commence at a later stage in the present study when compared to the reference study. It is evident that the age ranges are not defined for the scores 14 and 15 in the McKern and Stewart study indicating that the changes are not well-defined to be categorized during the later stages consolidating the fact that the changes get obscured as the age advances.8, 9

The values of standard deviation increases as the total score increased in both the current research and McKern and Stewart study8, 9 indicating that the changes are better defined in the developmental rather than degenerative phases of the bone. Thus the likelihood of changes in each component being more pronounced in early stages are high compared to the older age group. 9

The results of the current research were also compared to similar research in Punjab10 and the results are drafted in Table 3.

The changes in each score are seen to appear earlier in the study samples when compared to those used for the research in Punjab. The standard deviation recorded in their study shows a wider age range for the higher scores when compared to the current study. These findings highlight the regional variations in the findings of the bones indicating the role of nutrition, climatic and environmental factors to bring about these changes.

The mean age of the total scores of the present study were compared with studies done in other parts of India10, 11, 12 (Table 4). It is evident that the age at which the said changes are observed vary from one region to another. This difference in the mean ages of appearance of the described changes highlights the diversity in the features of skeletal remains in different regions in the same country. These findings have only proved that different regions within the same country show varied findings for the same study.

The age changes displayed in the pubic symphysis of the bones of the natives of Dakshina Kannada district were delayed in comparison to the samples in the reference study. Thus the findings of the McKern and Stewart study cannot be used in its original form in this population. The age ranges for the said total scores need to be modified to suit the demography of the native population for which it is being used. Thus, the present study needs to be conducted on a larger scale with increased duration and number of samples. But this method has the potential to deliver precise and accurate age estimates of individuals prior to the onset of advanced degenerative changes. A pubic symphysis that exhibits epiphyseal changes and/or billowing is suitable for this method; a pubic symphysis that exhibits degenerative changes (i.e. porosity and/or rim erosion) is not suitable.