Comparative assessment of odontometric parameters for gender determination: A hospital based cross-sectional study

Introduction: Determining gender is one of the most important procedure in forensics. Teeth are made of the most enduring mineralized tissues in the body, as such, they have an extraordinary resistance to putrefaction and the effects of external agents (physical, thermal, mechanical, chemical or biological) which makes them invaluable material for anthropological, genetic, odontologic and forensic examinations.

Conclusion: We conclude that buccolingual width of maxillary first molar can be used to predict the gender when only teeth of maxillary arch are available for forensic examination.

Identification of an individual is a pre-requisite for certification of death and for personal, social and legal purposes. This establishment of identity is accomplished by several parameters including age, sex, dactylography, footprint, stature, tattoo marks, scars etc.1 The initial step in the process of forensic human identification is gender determination.2 Correct gender identification excludes the pool of missing persons to just one half of the population. In forensic contexts, however, it is common to recover partial remains, with fragmentary skull and pelvic bones. Teeth being the central component of the masticatory apparatus of the skull are good sources of material for civil and medico-legal identification purposes. Additionally, the degree to which they provide resistance to destructive force in terms of bacterial decomposition, fire, and fracture, make them valuable for forensic examination and research.1 Sexual dimorphism, it refers to those differences in size, stature, and appearance between male and female that can be applied to dental identification since no two mouths are alike.3 Tooth size standards based on odontometric investigations can be used in age and sex determination because human teeth exhibit gender dimorphism.4

This study included 15 male and 15 female participants with age ranging from 20 to 35 yrs, who came to our department. The following criteria were considered for the selection of participants.

Following informed consent from each of the selected participant, full upper arch impression was made using alginate impression material which was poured immediately with dental stone to avoid dimensional alteration. Then, measurement of all the required dimensions were taken from teeth from both left and right on the maxillary cast using digitals calipers, resolution 0.01mm (Figure 1). All measurements (mm) were carried out by a single examiner to avoid inter-observer error.

It was measured as the greatest distance between mesial and distal surfaces of crown5 (figure:1). Both left and right MD dimensions of each tooth was measured, average value was taken for calculation for each tooth.

It was measured as the greatest distance between buccal and lingual surfaces of crown parallel to the long axis of the tooth5 (Figure 2). Both left and right BL dimension of each tooth was measured. 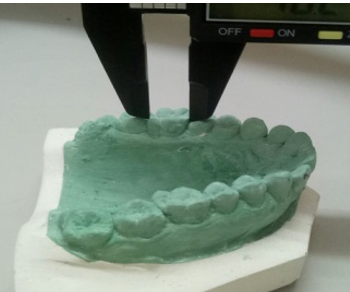 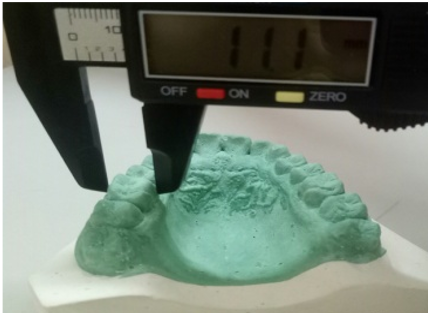 It was measured by placing the beaks of digital vernier caliper at the cusp tips, and the linear distance between the left and right canine was measured. 6 (Figure 3) 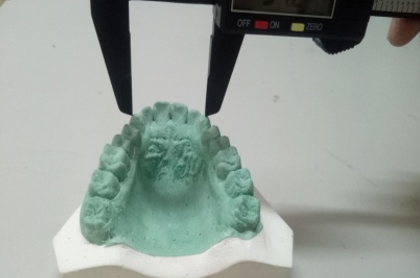 The percentage of sexual dimorphism was calculated using the following formula:1

Where “a” is the canonical discriminant constant, “b” is the unstandardized coefficient, and P is the parameter. The “y” value thus obtained from calculation after applying the discriminant formula for various parameters was compared with group centroids as given in Table 3. The approximate of the “y” value to a particular group centroid value helps us determine the gender of the person.

Table 1 shows descriptive statistics. The mean values of all the measurements in males were greater than females. There was a statistically significant difference in mean value of bucco-lingual width of molars (on left side, right side and average) between males and females. Mesiodistal width of canine (on left side, right side and average) and the inter-canine distance were also showed significant difference between males and females (P<0.001). Other variables/parameters did not differ significantly with gender. This indifference could have arisen partly due to the smaller sample size.

Table 3 shows constants used in the formulae and centroid value for male and female.

Figure 4 shows graphical representation of accuracy of all the parameters of this study. Except for the mesiodistal width of molar, which is close to 50% (53.8), all other parameters are fairly likely to predict the gender. Bucco-lingual width of molar posed the highest prediction accuracy for gender determination.

[i] ⁎Average= average of right and left

Graphical representation of accuracy of all the parameters of this study 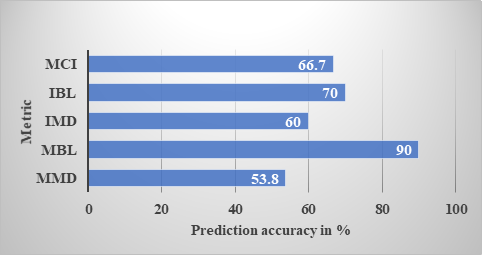 The initial step in the process of human bodies identification in forensic is gender or sex determination. Gender determination, even performed before age and stature2 as subsequent methods for age and stature estimation are often gender dependent.3 Various methods are used to establish the identity of unidentified remains. The only method with totally accurate result is the DNA technique, however in many cases and for various reasons, it cannot be used.7 Teeth are the hardest organ in the body and crucial in post-mortem identification procedure. Although Pelvic and cranial bones can be more accurate in identifying gender, they are rarely in optimal condition in extreme case, such as natural disasters or mass graves, which may prevent their accurate estimation for gender differentiation. In such circumstances, teeth are considered quite useful as they are often recovered intact.8 Identification of gender with the help of dental features can be categorized into metric and non metric methods. Non metric features methods are based on presence or absence of particular morphological dental features such as cusp of carabelli, upper incisor shovelling, hypocone and protostylid whereas metric features are based on tooth measurements. Identification of particular population or ethnicity can be done using non metric features. However, the use of the metric approach in gender estimation is more structured, less subjective and additionally, it can be repeated to validate the obtained results.9 Hence, our study was carried out based on metric approach.

According to our results, all the measurements of every tooth included in the study were higher in males than females. The statistical significant difference was observed in buccolingual width of molars, mesiodistal width of canines, inter-canine distance.

Although, there was no significant difference in canine index between genders in our study, significant differences were observed in canine mesio-distal crown width and inter-canine arch width between genders with males being higher mean values than females. Results in our study were in agreement with Abhishek Banerjee et al.,4 Rahul Srivastava et al.9 for mesiodistal crown dimension, Prakash Chandra et al.15 for mesio-distal dimension and inter-canine arch width. This sexual dimorphism in teeth has been explained by various theories: 1) According to Moss, because of the longer period of amelogenesis there is a greater thickness of enamel in males compared to females, leading to a difference in dimensions. 2) Sex chromosomes are also responsible for the different effects on the tooth size. Compared to the ‘X’ chromosome, the ‘Y’ chromosome influences the timing and rate of body development, thus producing slower male maturation.9

Limitation of the Study

Sample size was limited as this was a hospital based study on patients visiting a teaching hospital.

In the present study, buccolingual width of maxillary first molar exhibited statistically significant gender dimorphism. The percentage of sexual dimorphism was higher than other parameters included in the study with prediction accuracy of 90%. This result led us to conclude that buccolingual width of maxillary first molar can be used to predict the gender when only maxillary teeth are available for forensic examination.

The author declares no conflict of interest.