The present study was conducted in Department of Forensic Medicine and Toxicology of a Government Medical College and Hospital in year 2017. Total 2781 postmortem examinations were conducted in 2017. Out of that total 2781 cases, 176 compression of neck cases came for postmortem and amongst these 105 cases were studied in detail as per inclusion criteria. Out of 105 cases of compression around neck, which were studied, there were 93 cases of hanging, 10 cases of ligature strangulation, 01 case of manual strangulation and 01 case of accidental strangulation studied. On gross in total 11 cases of strangulation hemorrhage in subcutaneous tissue, strap muscle and sternocleidomastoid muscle observed and in only 20 cases of hanging there was hemorrhage observed in subcutaneous tissue and no hemorrhage observed in strap and sternocleidomastoid muscle in hanging cases. In this present study on histopathology vascular congestion and extravasation of red blood cells observed in 28 cases of compression of neck. These findings indicate the importance of histopathology of underlying neck structure in neck compression cases in documenting antemortem nature of hanging and strangulation in doubtful cases.

Asphyxia is inability to breath; resulting from obstruction to airflow due to mechanical interference with the process of respiration. In asphyxia, there is prevention of exchange of air between the atmosphere and the lung alveoli and there is lack of oxygen supply to the tissues.1 Violent asphyxial deaths are one of the most important causes for unnatural deaths. Usual causes of violent asphyxial deaths are hanging, strangulation, throttling, chocking and drowning.

In cases of neck compression, ligature is applied to neck and usually within two hours of death it usually produces prominent ligature mark. Postmortem suspension of body may be used by criminals to mislead the investigating agency and to hide the crime. In some cases, hanging may be homicidal and in all such doubtful cases, examination of scene of crime becomes important as a circumstantial evidence.2

The various features of hanging and strangulation deaths can be deduced from the history, police investigation and gross postmortem examination findings. In unusual asphyxial deaths a great challenge rests before the forensic experts to establish the cause and manner of death. Here lies the importance of clubbing the histopathological examination findings with the routine gross autopsy findings.3

The histopathological examination of ligature mark and the underlying tissue may help in determining deeper damage to tissues and also to know the antemortem or postmortem nature of injuries.4 With this in mind the present study was conducted to evaluate the histopathological findings in the neck structures like Sternocleidomastoid muscle, Strap muscle, common carotid artery, Esophagus and skin; and to correlate these changes with the gross findings.

This observational study was conducted at Department of Forensic Medicine, Government Medical College and Hospital in year 2017. Total 2781 cases were brought for medicolegal postmortem examination and amongst them 105 (3.77 %) cases were studied as per inclusion criteria of all brought dead cases of unnatural deaths due to compression of neck. The study was carried out on medicolegal cases brought for postmortem examination by police with inquest and proper requisition; hence no consent was necessary to obtain from relatives or any other authority in this particular study. As per the prevailing mandatory standard procedures of the Institute, the prior permission cum no objection certificate to carry out the study was obtained from Institutional Ethical Committee. Exclusion criteria were bodies brought with 1) decomposition 2) hospitalization 3) having trauma over neck, extreme overstretching, or whiplash-injuries in vehicular accident, neck surgery and pathological lesion. External and internal examination of neck structure was carried out to note injury over neck, extravasation of blood in soft tissue, muscle, common carotid artery and fracture of throat skeleton. The examination was carried-out with in situ and with en block examination. Tissue specimens were fixed in 10% formalin. For processing and staining of tissue standard procedure as given in Theory and Practice of Histological Techniques by Bancroft and Gamble5 were followed. Slides were then stained with Hematoxylin and Eosin stains and read under microscope.

Type of ligature material and type of knot

Level and nature of ligature mark

Histopathological findings in the skin of ligature mark 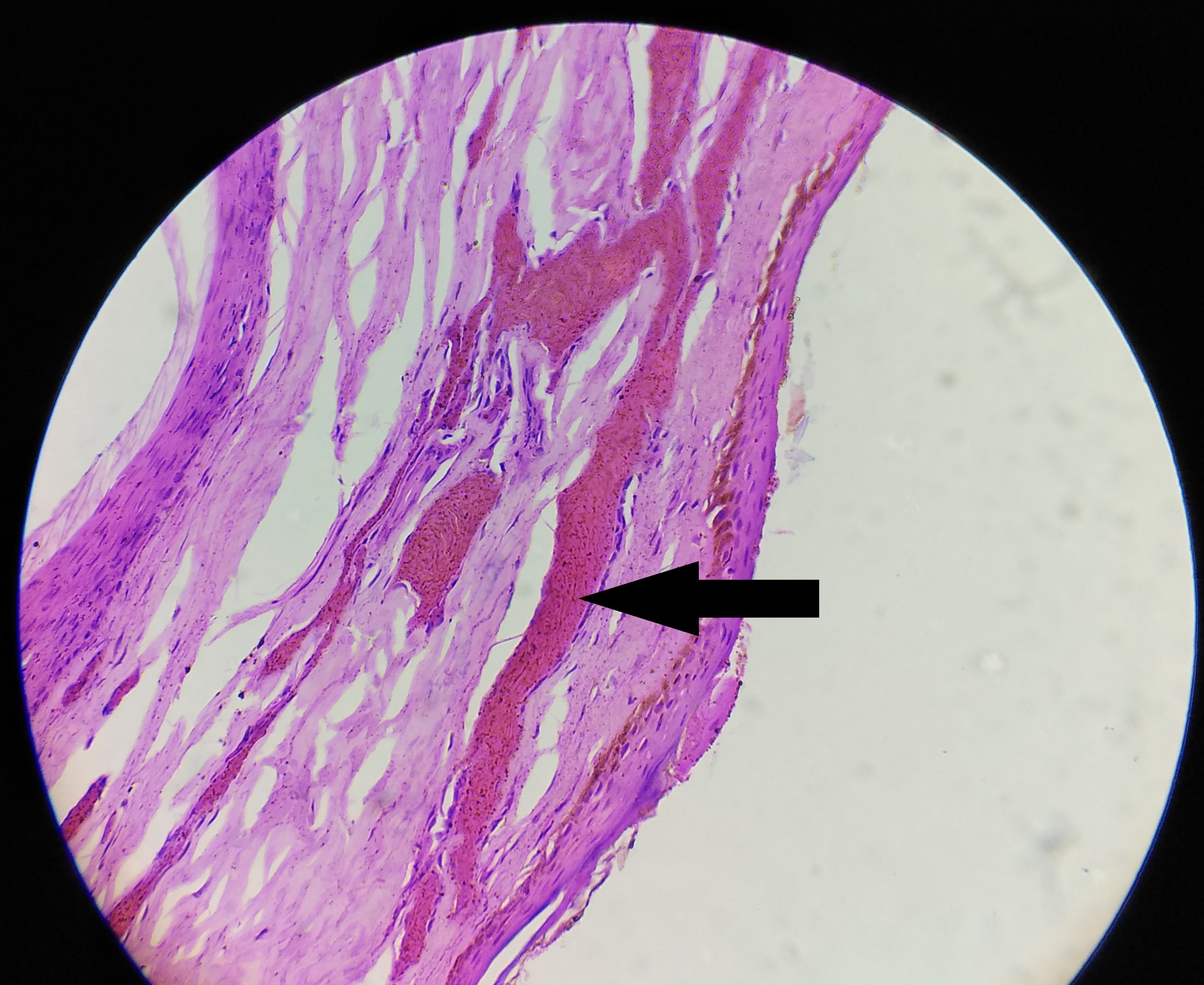 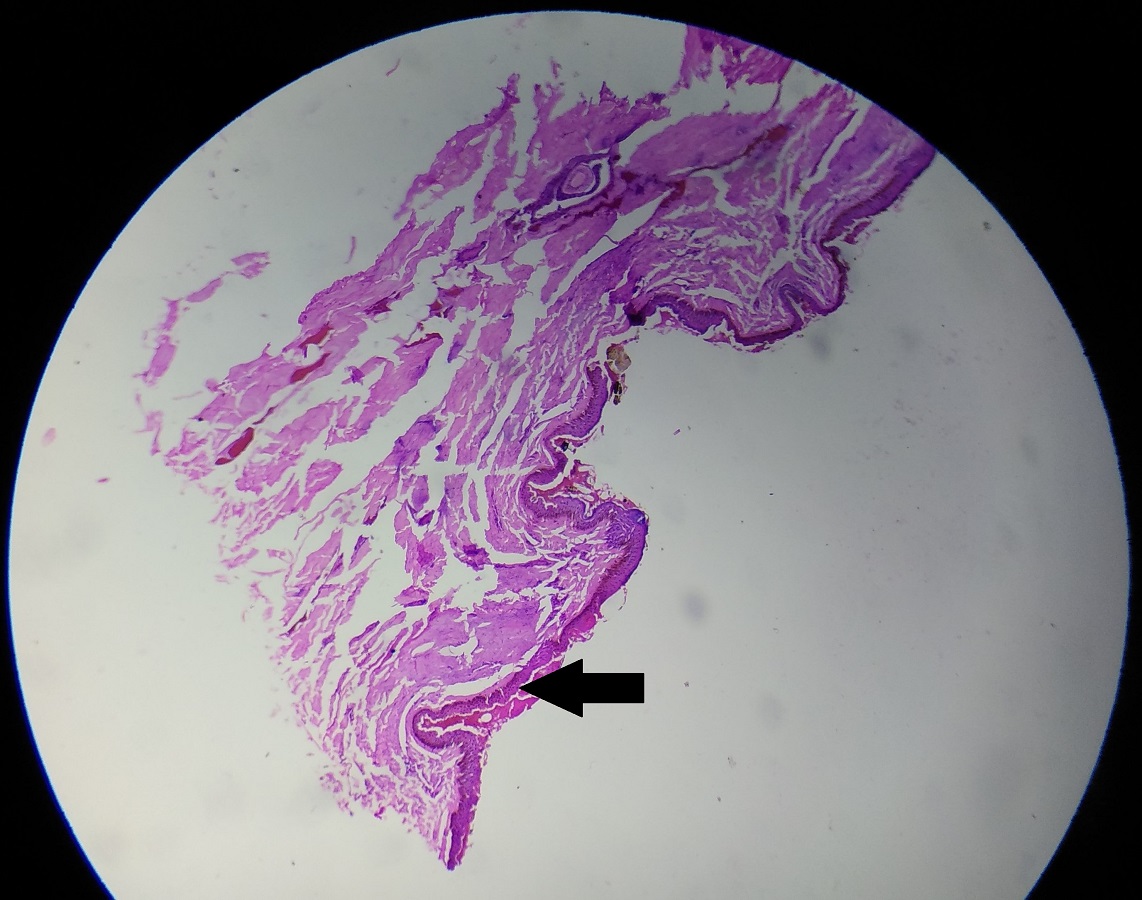 Histopathological findings in the neck muscle 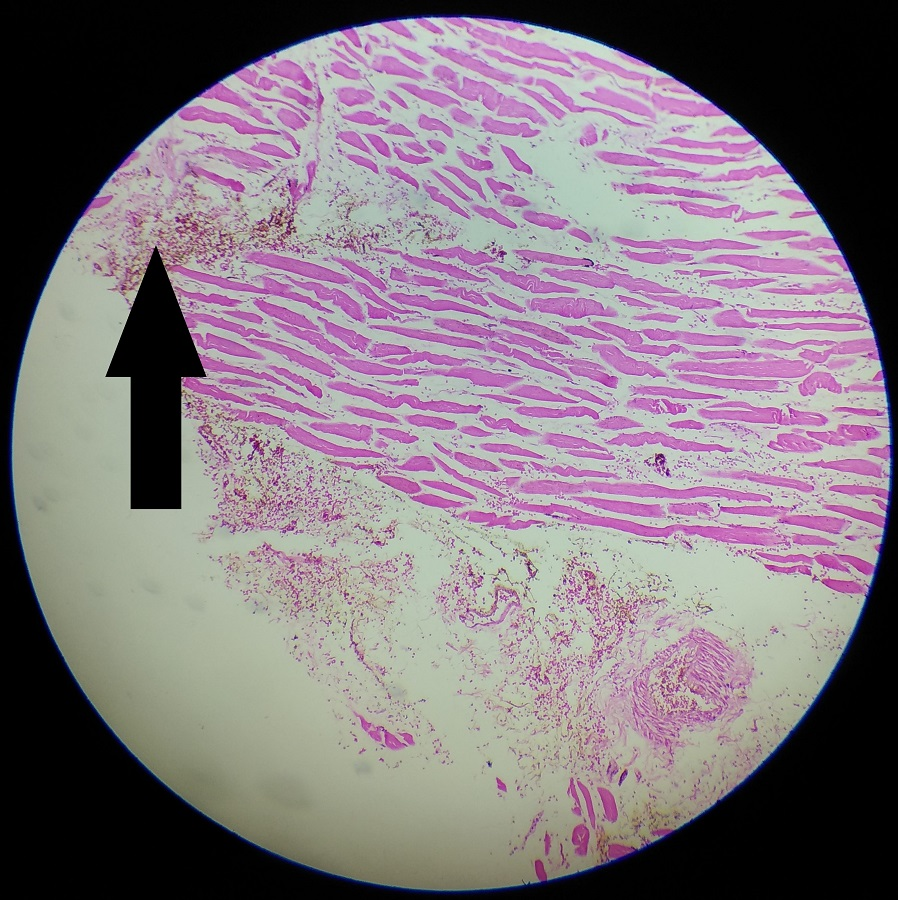 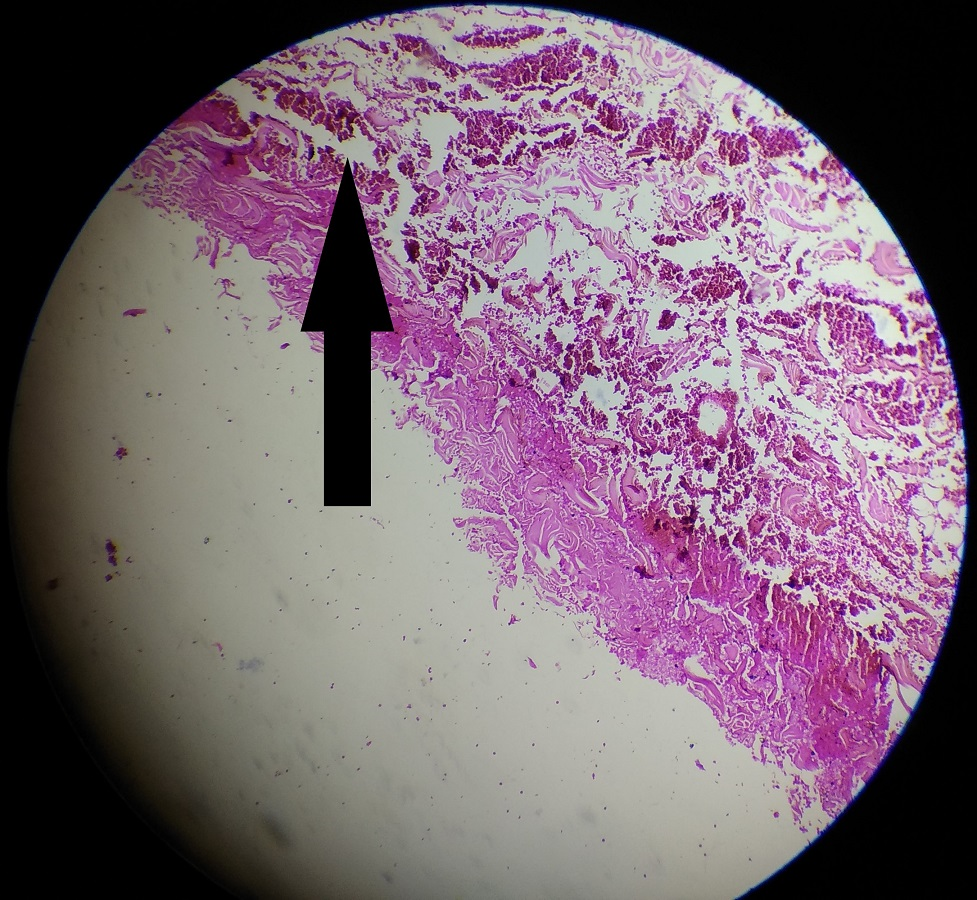 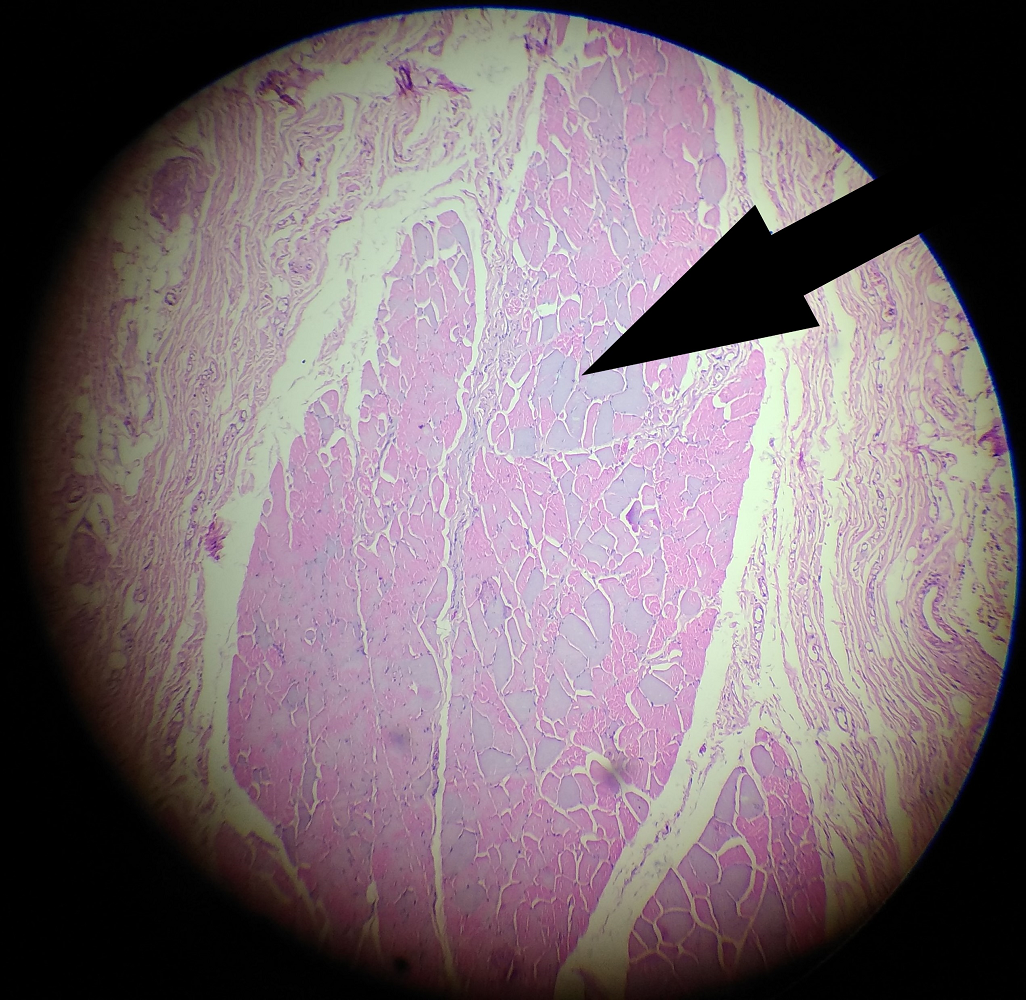 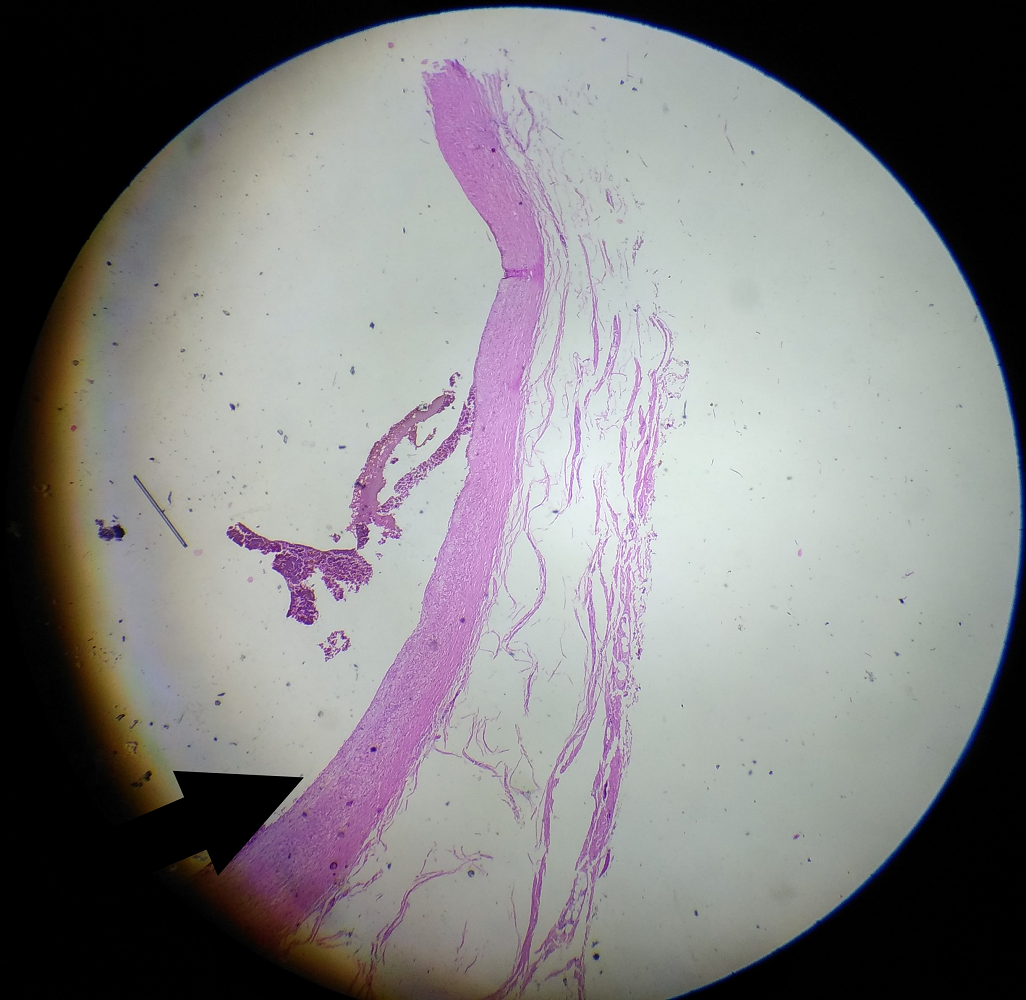 Histopathological findings in the esophagus

In all cases, histological examination of oesophagus was unremarkable.

Age and sex-wise distribution of cases

Cases according to cause and manner of compression

Level and nature of ligature mark in cases

Histopathological findings in the skin of ligature mark

Histopathological findings in the neck muscle

Infiltration of leucocytes in sternocleidomastoid muscle and strap muscles was seen in 03 cases each. Gordon18 in his textbook states that a portion of skin and deeper tissue in relation to the ligature mark should be preserved histologically for evidence of tissue reaction. Although margination and a limited emigration of leucocytes may occur in tissues in response to injury after somatic death in general cases but this investigation would be of value in case of hangings, only if the period of time that elapsed before death was sufficiently long enough for tissue reaction to develop.

Histopathological study of esophagus showed normal histology in all cases. Study conducted by Nicolic et al.22 showed “banding” of esophagus on gross and histopathological examination which was a pale area at the level of constriction. They could not conclude it whether it was a postmortem artefact or bruising due to rupture of vessels at the level of forceful constriction. Knight 23 mentioned banding of esophagus in nontraumatic cases as a routine finding and therefore such finding should be considered as non-specific finding.

The most common manner of neck compression was suicidal. Hanging was the most common death due to compression of neck studied. Hanging is almost always suicidal; unless and until contrary is proved. One case of throttling was observed in the present study. No case of accidental hanging was reported in present study. Eleven case of ligature strangulation was found in present study and one case of accidental strangulation was noted. Hanging was one of the preferred methods of suicide by males (58.09) than females (30.47). Male cases outnumbered in female cases in hanging but in strangulation female cases outnumbered male cases.

In ligature compression of neck, the commonly used ligature material was nylon rope. The ligature mark completely encircling the neck was common in running type of noose.

The most common internal neck finding in neck compression deaths was sternocleidomastoid hemorrhage. In 11 cases of strangulation deaths, hemorrhages were observed on gross examination and in 28 cases hemorrhages observed on histopathology. Carotid artery injury was present in few cases of hanging. The histopathological examination of skin of ligature mark shows tissue reaction in those survived cases in which sufficient time period is present for tissue reaction to occur.

The present study concludes that a detail examination of the gross and histopathological findings of the neck structures, in doubtful cases is useful in establishing the cause and manner of death. Histological changes in neck muscles are a useful and effective mean to ascertain presence of compressive forces on neck and its antemortem nature.