Background: A group of tumors that develops in the brain and spinal cord is called glioma. Histologically gliomas are classified into astrocytoma, ependymoma, oligodendroglioma, brain stem glioma and oligoastrocytoma. The present study was conducted to study histological grading of gliomas and correlate it with patient’s age, sex, GFAP staining, role of the Ki-67/MIB-1 labelling indices (PIs).

Materials and Methods: The present retrospective study was conducted on 50 biopsies received. All specimens were subjected to immunohistochemistory for GFAP and MIB-1 and correlated with WHO grading for glioma.

Results: High incidence of glial tumours was seen in the 3rd and 4th decade with slight male predominance (60%), with commonest site being frontal lobe. Glioblastomas (Grade IV) constitute the most common glial tumour. A statistically significant correlation was observed between GFAP staining and Ki-67/MIB-1 with histological grading.

Conclusion: The study can prove helpful in diagnosis and histological grading of gliomas and in planning treatment protocols and strategies.

The brain chiefly comprised of two cell types: neurons and glial cells (macroglia and microglia). Neurons are specialized cells consisting of neuron cell body, dendrites, and axons/synapses. Whereas, the glial cells functionally and structurally support the neurons and other functions of central nervous system (CNS). The macroglial cells are of three different types: astrocytes, oligodendrocytes, and ependymal cells.1 Microglia cells are the immune defense system of the CNS that protects neurons against pathogens and helps to retain brain homeostasis.1

A group of tumors that develops in the brain and spinal cord is called glioma. Histologically gliomas are classified into astrocytoma, ependymoma, oligodendroglioma, brain stem glioma and oligoastrocytoma.2 Astrocytoma being the most frequent type commonly diagnosed in adults and older age patients.3

In 2016, World Health Organization (WHO) has given an updated CNS classification system, combining histological findings with genetic information, in order to give a precise diagnosis thus framing an appropriate treatment plan.4 Astrocytoma are histologically graded from I to IV and further subclassified depending on acquired genetic lesions.4 GFAP is mainly expressed in mature astrocytes as a biomarker for astrocytoma.5 High GFAP expression mark more differentiated and less malignant tumors.

New biological marker, Ki -67 is a novel non histone nuclear protein found to be an adjunct to conventional morphological variables. Immunohistochemistry helps in making specific confirmatory diagnosis by detecting lesion specific markers. Immunohistochemical determination of proliferative activity is a useful supplement to ascertain the histopathological diagnosis of glioma. Ki67/MIB-1 immunostaining is the most commonly used method that correlate positively with grade and prognosis of tumor.6

The present study was conducted to study histological grading of gliomas and correlate it with patient’s age, sex, GFAP staining, role of the Ki-67/MIB-1 labelling indices (PIs).

The present retrospective study was conducted on the biopsies received at the Department of Pathology from the Department of Neurosurgery, Dr. S.N. Medical College, Jodhpur from May 2017 to 2019. The expression of GFAP and Ki67 was analysed in gliomas; and their role in diagnosis and histopathological finding based on WHO Classification 2016 grading was also evaluated. All the biopsy specimens with the clinical diagnosis of central nervous system tumours were studied and all histologically diagnosed CNS neoplasms were included included in the study, followed by grading according to the WHO criteria. Reactive and Non neoplastic cystic lesions, Non glial neoplasms, Collision tumors and unfixed biopsy specimen unfit for IHC were excluded from the study.

Fifty histopathological samples were included in the study and all the relevant information i.e. age, name, type of specimen biopsy was obtained from the relevant hospital from where tissue is received. The specimen was fixed in 10% formalin for 24 hours, followed by gross examination. From each specimen, single or multiple sections was taken from representative area, followed by processing, sectioning and preparing slides.

Slides were then stained with routine hematoxylin and eosin stain (Harris Method) and mounted with DPX. All the relevant slides were examined microscopically and diagnosis and grading of the tumor was confirmed. All specimens were subjected to immunohistochemistory for GFAP and MIB-1 and correlated with WHO grading for Glioma. Being specific for glial cells, GFA protein is useful to diagnose those glial tumours which are difficult to be identified by haematoxylin-eosin stain. Scoring was done using scale 0 to 4+ semiquantitavely for both cell number and staining intensity.

All the immunostained sections of different grades were scanned randomly at 100x magnification for the most densely labelled areas, and then the nuclear counts (1000 nuclei) were taken at 400x magnification in a systemic manner by keeping in mind not to repeat tumor nuclei while counting. Vascular endothelial cells, lymphocytic cells and necrotic areas were excluded from counts. The MIB-1 labelling index was expressed as percentage of MIB-1 positive tumor nuclei per 1000 tumor nuclei counted per specimen. The data collected was subjected to statistical analysis using SPSS version 20.0 software at level of significance p=0.05.

Frequency of tumors was observed (Table 1), followed by grading them using WHO grading system for glial tumours. 10% tumours were of WHO grade I, 18% grade II, 32% grade III and 40% belong to grade IV. Histological subtypes of glial tumors were also observed (Table 2). 94% cases showed increased cellularity and 96% had cytological atypia. Mitosis was present 84% cases with all cases of grade III and IV tumours showed brisk mitosis.

Microvascular proliferation was seen in 56% cases. 4 and 2 cases of anaplastic oligodendroglioma and anaplastic ependymoma respectively had increase tumour vascularity. Out of 20, 16 cases of GBM showed both glomeruloid tufts and vascular hypertrophy. Tumour necrosis was present in 52% cases. Mitotic figures per 1 high power field (40X) were counted for each tumour and correlated with grades of tumors using ANOVA statistical analysis (Table 3) and a regression equation (Mitosis=3.154x WHO Grade) was obtained (Figure 1).

Distribution of type of tumours

Mean of Ki–67 LI in different grades of Glial tumours 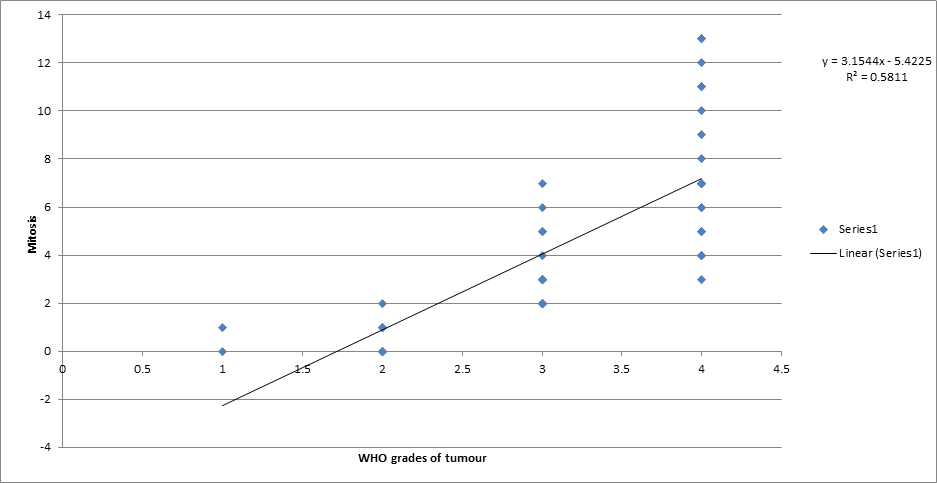 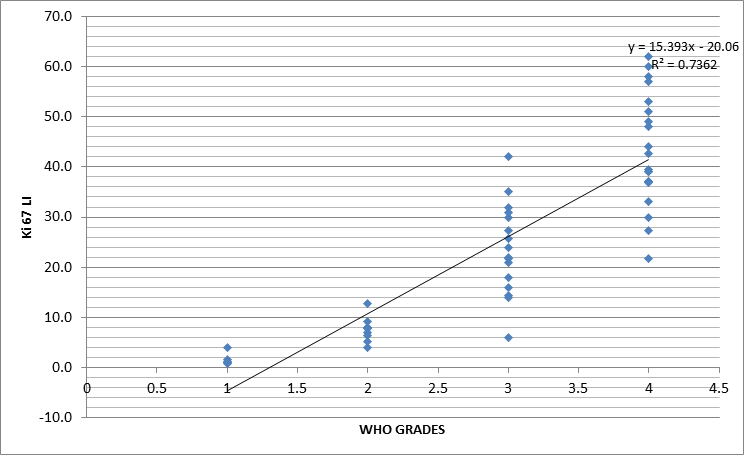 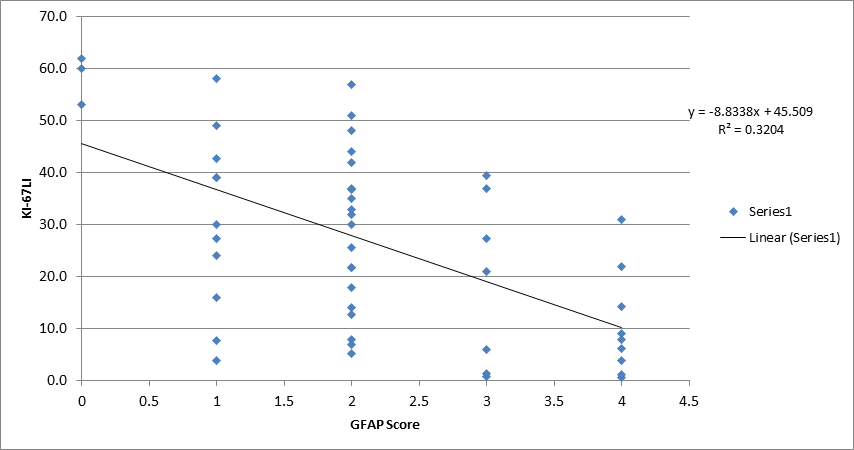 Assessment of GFAP status is essential for confirming the diagnosis and assessing the degree of differentiation of neuroepithelial tumours. GFAP is strongly expressed in astrocytes and other glial cells mainly in the cytoplasm than cellular processes. In the present study 50 cases of glial tumours were evaluated and subjected to analysis using immunohistochemical level of GFAP and expression of proliferation marker Ki-67/MIB-I.

Immunohistochemical study of molecular markers has been more accurate and added practical value in the pathological diagnosis and prognostic judgement. GFAP stain was applied on histologically proven glial tumours and results were confirmed and compared. GFAP expression is believed to indicate the differentiation status of astrocytes. Some GBM which show high cell proliferation, contain more undifferentiated astrocytes and do not express GFAP extensively or may be negative sometimes as we have observed in our study. Here negative expression of GFAP stain is negative in three cases of GBM specifically. A decrease in GFAP expression has been associated with growth and malignancy of glial tumours and was more prominent in high-grade than in low grade gliomas. Hence GFAP is used for guiding diagnosis, differential diagnosis, tumour malignancy, treatment guidance and prognosis evaluation, hence it proves to be a lineage marker with 100% specificity. This study was in accordance with the study by Mukhiya GW et al.14

Thus we conclude that GFAP expression score decrease with increasing tumor grade and can be considered as a marker of less malignant and more differentiated gliomas and also improve the accuracy of assessing the differentiation state of gliomas in clinical and experimental settings and will benefit glioma classification.

In our study Ki-67 expression was similar to observations of Giannini et al.16 and Rodriguezb et al.17 It should also be noted that the MIB labelling index did correlate with the increasing tumour grade. This was in contrast with the findings of Bhati Sanju et al. who showed insignificant correlation between GFAP and Ki-67. This positive and highly significant correlation between Ki-67 LI and mitosis in our present study and study of Bhelghali MY et al.18 in our series of gliomas are in agreement with the literature.

Our study revealed that Glioblastomas (Grade IV) constitute the most common glial tumour followed by Grade III gliomas. WHO histological grades remain the most important prognostic factors. GFAP is a very reliable lineage marker and is inversely correlated with the grade of gliomas. Ki-67 has a great value in the histochemical assessment and in combination with histomorphological features, it can be used for designating the exact grade of the tumour. It has proven to be best immune marker in this study. As correlation of histopathologocal features of gliomas, their grading alongwith correlation between GFAP score and KI-67 LI was significant, thus these features can be used for exact diagnosis and grading of glial tumours, leading to better management and treatment of these tumours.