Barriers to being physically active: An exploratory study among medical students

Objective: The present study is an attempt to explore various barriers for being active among medical undergraduates.

Materials and Methods: The study was conducted at a medical college in Uttar Pradesh. Sample was drawn using convenience sampling. The data collection was done based on “CDC questionnaire on barriers to being active” using self-administered questionnaire. All the participants fulfilling inclusion criteria were asked to fill the forms honestly by choosing the best option describing their barrier for physical activity against each question in the proforma.

Results: A total of 203 MBBS students participated in the study, comprising of 108 males 95 females. The mean age of the participants was 22.02 years (Range 18 years-26 years). The factor which was perceived as the most significant determinant for physical inactivity was “lack of willpower”. Other significant contributors were “lack of resources”, “lack of energy”, “social influence”, “lack of skills” and “fear of injury” in decreasing order of importance. The sum scores of seven barriers studied were significantly correlated (p<0.01) to each other with strong correlations. The highest correlations were noted between “Lack of will power and Social Influence” (0.682) and “Lack of skills and Social influence” (0.630) and weakest correlation was noted between “Fear of Injury” and Lack of will power” (0.218).

“In India it is estimated that overall, 392 million individuals are Physically inactive. This is a staggering figure and implies a huge population at risk for developing diabetes and other non-communicable diseases.7 This underscores the urgent need to improve overall physical activity levels with specific reference to recreational physical activity. This could go a long way in curtailing the risk of diabetes and obesity in India including many other Non-Communicable diseases”.7

To address this public healthy urgency requires hitting at the root cause. The addressal of root cause requires identifying the risk factors and to know why people are not able to remove the risk factors from their lives. Considering the immense benefits of Physical Activity in decreasing the risk of non-communicable diseases, the present study is an attempt to understand the barriers for physical activity among medical undergraduates in a medical college of Uttar Pradesh.

This observational study was planned at Dr RMLIMS, Lucknow, Uttar Pradesh and data collection was done at Govt. Medical College, Jalaun, Uttar Pradesh during April 2020 to July 2020. Since the objective of study was to explore barriers to physical activity among medical undergraduates, convenience sampling was utilized to save time and resources. Data collection was done during May-June, 2020. MBBS Graduates (first year to final year) who had the ability to participate in online surveys, willing to participate and available at the time of data collection were enrolled for the study. A consent was sought from the participants and they were well informed about the nature and purpose of the study and also about the intended goals to be achieved by the study. The students who agreed to participate in the study were screened for minimum physical activity recommendations as prescribed by WHO. The students who did not meet the minimum physical activity recommendations were enrolled for the final study. A student who is a known case of any medical disorder or illness which make it difficult for participant to do physical activity was excluded from participation in the study and likewise a student having any injury limiting physical activity during the study period was also excluded.

The data collection was done on “CDC questionnaire on barriers to being active”8 using self-administered online form. The link of form was shared with participants on “whatsaap” who met the inclusion criteria. All the participants were asked to fill the forms honestly by choosing the best option describing their barrier for physical activity against each question in the proforma.

We attempted to study variance in seven latent variables/ factors through self-administered questions (observed variables). Schreiber JB et al. have described techniques of reducing the number of observed variables into smaller number of latent variables through observation of covariance among the observed variables.9 The paper suggests that there is no exact rule for the number of participants needed but 10 participants per estimated parameter appears to be the consensus. The current study uses a pre-designed questionnaire with 7 parameters; hence the required minimum sample size would be 70. However, since we were using convenience sampling, we decided to enrol as many participants fulfilling the inclusion criteria and consenting to participation subject to a minimum of 70. WhatsApp link was sent to 300 students and out of which 243 responses (response rate-81%) were received. 40 forms were incomplete and many vital information’s were missing from them. After excluding those 40 forms, a total of 203 responses were included in the final analysis.

Barriers to being active questionnaire

The English version of the questionnaire was shared with the participants. The CDC developed the barriers to being active questionnaire, which consists of 21 items related to seven different barriers to physical activity (CDC, 2016). The following were the seven different barriers to physical activity: 1) lack of time, 2) social influence, 3) lack of energy, 4) lack of willpower, 5) fear of injury, 6) lack of skill, and 7) lack of resources (CDC, 2016).8 Some of the questions in the survey were, I’m getting older, so exercise can be risky”, I don’t have access to jogging trails, swimming pools, bike paths, I’m embarrassed about how I will look when I exercise with others”, and I want to get more exercise, but I just can’t seem to make myself stick to anything”. The questionnaire used a 4-point Likert scale and each barrier in the questionnaire had three items that are summed for scoring. The Likert scale included: strongly agree, agree, disagree, and strongly disagree.

In a particular Barrier domain, the answers to each of the 3 questions were added based on numerical value assigned to it. If the total of this figure was more than or equal to 5 it signified that the particular barrier constitutes a significant barrier for that person.8

The sampling frame of this research study was medical undergraduate students from Rajkiya Medical College, Jalaun, Uttar Pradesh. A total of 203 MBBS students participated in the study, comprising of 108 males 95 females. The mean age of the participants was 22.02 years (Range 18 years -26 years).

Barriers to being active

To assess specific category of barriers, the methodology as advocated by CDC was utilized. Grouping of questions was done based on the CDC methodology and cumulative scores were calculated in each of the seven domains to see the impact of each domain/factor in the study population responsible for their physical inactivity or physical Activity not up the desirable levels.

Main domains for being physically inactive 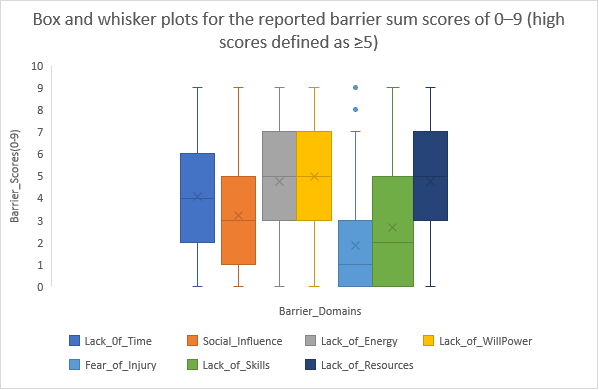 The sum scores of seven barriers studied were significantly correlated (p<0.01) to each other with strong correlations. The highest correlations were noted between “Lack of will power and Social Influence” (0.682) and “Lack of skills and Social influence” (0.630) and weakest correlation was noted between “Fear of Injury” and Lack of will power” (0.218). It was interesting to note that “Social Influence” had strong correlation with all other barriers, suggesting that it has a major influence on other barriers as well.

The health benefits of physical activity are immense and well-established too.1, 2, 3, 4, 5 Yet, It is observed that globally and in India without any exception that huge number of people are either physically inactive or not active up to the recommended level.7 To address this important public health issue it is imperative to understanding followed by addressing the perceived barriers to performing recommended Physical Activity levels. In the present study the factor which was perceived as the most significant determinant for physical Inactivity was Lack of willpower. Lack of resources were perceived to be the next important barrier for physical inactivity in study participants. Study done at Riyadh10 also documented Lack of willpower and Lack of resources as very important determinants for physical activity.

The present study necessitates the importance of behaviour change activities to promote physical activity. In our study lack of resources was also an important determinant of such behaviour among medical students. For medical students it is also observed that, exhaustive and tiring daily schedules drains them out of energy and it also came out as an important factor to determine physical activity. To promote physical activity, it is also imperative to address issues like lack of resources, lack of skills and fear of injury in general. Health awareness in the form of motivational talks, lectures, IEC and addressing the above-mentioned issues can bring the desires changes to physical activity promotion. Motivation enhancement strategies along with creating enabling environment can be a wonderful strategy for bringing out the desired change in health behaviour.

WHO. WHO. Global recommendations on physical activity for health2010Geneva

WHO. Global action plan for the prevention and control of noncommunicable diseases 2013–2020 [Internet]. WHO press. Geneva2013www.who.int/about/licensing/copyright_form/en/index.html

CDC Quiz on "Barriers to Being Physically Active" [Internet]. 2016https://www.cdc.gov/diabetes/ndep/pdfs/8-road-to-health-barriers-quiz-508.pdf