Gunshot wound to the lumber spine – Autopsy based case report

Since their origin from China, firearms have gained popularity because of easy techniques and effectiveness. This has made them a popular choice of homicide and suicide. Here we present a case where the death is by shooting from a pistol from a point blank range. Bullet takes a crazy course once entered inside the body due to the variation in fluid flow, densities of various organs and air filled cavities. It becomes all the more difficult if there is surgical manipulation. Radiographs were done to have an idea about the place of lodgment of bullet in body. The advent of various radiographic methods like computer tomography and radiography have made the job of autopsy surgeon a little bit easier.

Firearms are described as weapons in which projectiles are fired with the help of exploding gases formed by burning of gunpowder.1, 2 Since their origin from China, they soon gained popularity because of easy techniques and effectiveness. They changed the course of warfare and history. They became popular for hunting, self-defense and killing.3, 4, 5 The autopsy surgeon during the examination of alleged death by firearm injuries has to have a profound knowledge about the type of firearms, wounds caused by them, and to provide evidence that could be useful in the court for justice.6, 7 Here we present a case where the death is by shooting from a pistol from a point blank range.

A 42-year-old male was brought to mortuary of AIIMS Bhubaneswar for autopsy following a Gunshot injury to abdomen. The eye witnesses informed that the deceased was working as pharmacist in a doctor’s clinic and an unknown guy entered the clinic injured the doctor who was sitting in clinic and while returning shot the deceased. They were taken to hospital where the deceased was operated but succumbed to death late night on same day. X-ray was done of whole body to detect any lodged bullets inside.

Sealed black poly bag which was provided for examination contained white shirt with blue prints, white vest soiled with blood, blue colored jeans with brown leather belt, one white handkerchief and one black and white wave pattern neck cloth. The shirt had a hole of size 0.5cmx0.5cm on left side with burned margins and 32cm below the neck line. The white round necked vest was soiled with blood and there was a hole of size 0.5cmx0.5cm on left side at a distance of 18.5cm from neck line. The holes in the vest and shirt are corresponding to same location.

On examination of the dead body, an oval shaped firearm entry wound of size 0.5cm × 0.75cm was present obliquely over left side of epigastrium (Figure 1). It was 8cm away from mid line of body, 23cm below lower margin of left nipple, 9cm above umbilicus and 108cm above the left heel. The firearm entry wound is surrounded by an abrasion collar which is more prominent on the left side of the wound. The margin of the wound was inverted and contused. On dissection the underlying soft tissues around the wound were found contused, spreading to the under surface abdomen muscles and passes through different levels with extensive contusion of soft tissue on abdomen wall. Mesentery was contused, lacerated and stitched at multiple places. Left psoas muscle was contused. The track of the bullet wound was found contused and passing through the abdominal wall (Figure 2) through and through the intestinal loops (surgically sutured and anastomosed while hospitalized) Then the track passes through intestinal loops to lumbar spine lateral aspect and pierced in muscle attachment of spine and intervertebral disc in lumbar spine L3-L4. Prevertebral muscles in lumber region are contused (Figure 3). The track of the bullet from entry wound was directed downward, backward and medially.

Entry wound of the bulllet 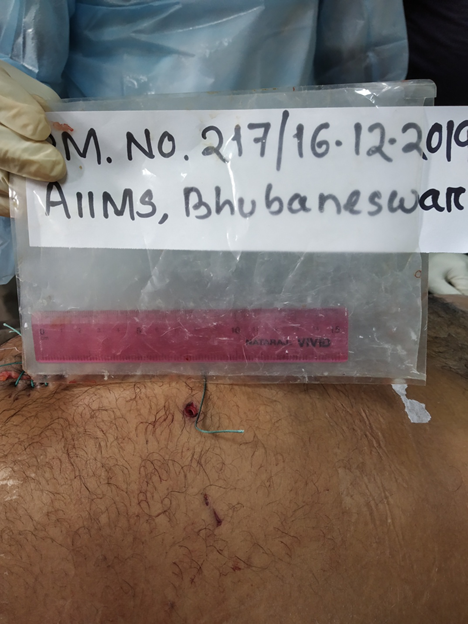 A probe showing the tract followed by bullet inside body 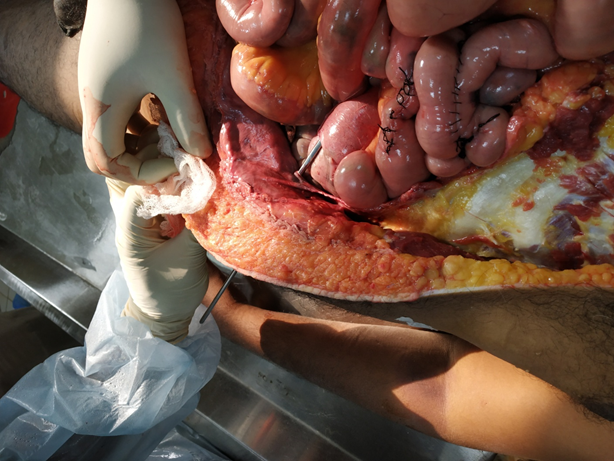 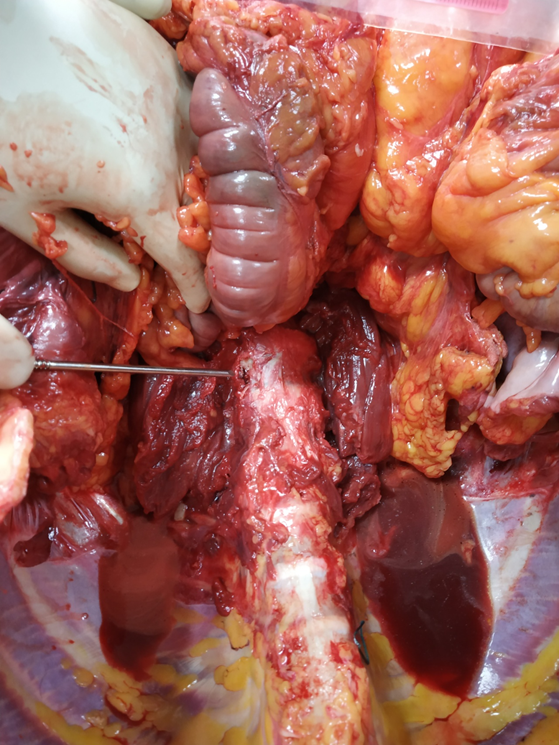 There were 17 tetras (surgical gauze) present in left abdomen and pelvis for soakage of blood. Colostomy suture are present and intestine is contused and has multiple sutures for anastomosis. Mesentery contused lacerated and stitched. Avulsion laceration of size 2.5cmx1cmx1cm is present in the inner aspect of great toe margins are contused. Surgical Sutured wound of size 35cm with 24 black sutures is present in mid line starting from xiphisternum to lower abdomen (For exploratory Laparotomy) margins are contused. Surgical Suture wound of size 5cm with 4sutures is present in right mid clavicular line (Colostomy wound) in right upper quadrant (right hypochondria). Fecal matter is adherent to it. Sutured wound with 1suture is present on left upper quadrant of abdomen for drainage tube.

Alleged history was provided by the eye witnesses. While deceased was working in a doctor’s clinic, the assailant came and fired at the doctor in doctor chamber and when deceased heard the voice he rushed to the gate of doctor’s chamber and assailant while coming out of chamber fired at him and left from the clinic. Doctor and deceased were carried to District hospital and then to corporate Hospital for better treatment where deceased was operated immediately. The deceased expired on 16.12.2019 at 3:05AM.

Final Opinion to cause of death

The cause of death In this case was given as hemorrhage and shock arising out of gunshot injury to abdomen.

Gunshot injuries have a very high degree of mortality. Evaluation of most gunshot injuries requires extremely fast imaging examination upon arrival at the hospital, followed by proactive treatment against infection, seizure, and increased intracranial pressure.5 The firearm injuries need correct evaluation of entry or exit wounds.1 The systematic study of bullet entry and exit wounds helped to establish the possible position of shooter and direction of firing. If the distance from where the firearm was shot is more than 5m then it is difficult to find range because of absence of scorching, tattooing and pattern due to not burnt shoot.2 The wounds vary according to the ammunition used. The ammunition and its mechanism of action of causing wound over the body may be different in appearance in entry site.3 If the fired bullet has diverted from its trajectory path the inlet wounds caused over the body may be atypical with ray like abrasion or corners with radiating bruises.4 The most common organs injured in order of frequency are small bowel, stomach, colon, liver, spleen & major retroperitoneal vessels.7

This case shows that imaging techniques like X-ray are helpful as diagnostic tool for the autopsy surgeons especially in cases for detection of residual of fire arm bullets; however there are limitations to these as x-ray doesn’t provide the spatial view so CT findings would be more accurate for workup. The traditional detailed post-mortem will always remain most insightful and irreplaceable tool in diagnosis of gunshot wound. We should consider every case is unique so one should be careful and also utilize the available diagnostic techniques.

Identity of deceased was not disclosed in case report.