Chhikara, Jain, and Mandlay: Autopsy emerged as ray of hope for estranged family: A case report

Autopsy emerged as ray of hope for estranged family: A case report

Human trafficking has been a dark truth of civilization all over the world since ages. The dwindling sex ratios in Haryana has made it a hub for trafficking of poor women for marriage from other states. These women are locally called “molki” or “paro” and are an easy prey to atrocities and expoitation. However, in some cases these women are accepted into the family and live a life of respect and fulfillment but investigating authorities always presume malfeasance in such cases. One such case where a natural death was considered unnatural and unscientific presumptions were made regarding age and sexual assault by the police implicating the family of such crimes. A meticulous autopsy revealed that neither the female was underaged nor the death was unnatural.

The Indian judicial system is an adversarial system, deriving its roots from the colonial system prevailing in the pre-independence era, where two advocates represent their parties’ case or position before an impartial person or group of people, usually a judge or jury, who attempt to determine the truth and pass judgment accordingly.1 As the judges are not an direct investigating authority, they rely heavily on the reports presented by the police/investigating agency to make their judgment. Like all other systems, ours is also subject to certain drawbacks, particularly the personal bias of investigating authorities which plays an important and decisive role in framing of charges.

Human trafficking has been a dark truth of civilization all over the world since ages. Although its name, motives, justifications and laws have changed with time and country, regretfully its existence cannot be denied even today. Haryana and Punjab are a prospering economy with fertile land and better per capita income as compared to other states.2 But with dwindling sex ratios (879/1000),3 it has become the hub for trafficking of poor women for marriage from other states. These women are locally called “molki” or “paro”4 literally meaning from other side or purchased bride and are an easy prey to atrocities and expoitation.

As this trading occurs on mutual benefit of both families and the women have almost no say in the matter, there are very few complaints that surface. Thus, police and other authorities cannot take direct action except on grounds of age for which no proof is available and claims made by victims are usually accepted. However, on the flipside of coin it has been observed that the condition of these women in such matrimonial contracts may not be as grime as projected in all the cases as many are accepted into the family and live a life of respect and fulfillment.

Despite both the aspects being true investigating authorities have a dogmatic and biased approach in such cases considering the women underage and victimized in all possible manners. One such case was brought to the authors for postmortem examination as apparent cause of death as per police inquest report being sexual assault and pregnancy of an under-age female. The death summary stated that patient was a 20-year-old female, resident of a neighbouring district admitted with postpartum day 27 with altered sensorium since 2 days, multiple episodes of vomiting and fever on and off since 15 days. General condition of patient was poor at the time of admission with GCS score 3 (E1 V1 M1). Despite treatment patient continuously deteriorated and expired after 3 days.

The deceased was an averagely built female individual of length 146 cm was wrapped in white sheet of cloth. The body was wearing:

Scalp hair were pleated into a braid with a black coloured hair band. White bandage was present over right thigh on its superior-lateral aspect. Two band-aid strips in criss-cross pattern were present over the lower back in midline. Rigor Mortis had passed off and post mortem staining was present over the back except at pressure points and it was fixed. A puncture mark of IV cannula was present over dorsal aspect of left hand.

Showing the built, clothes and accessories over the body of deceased 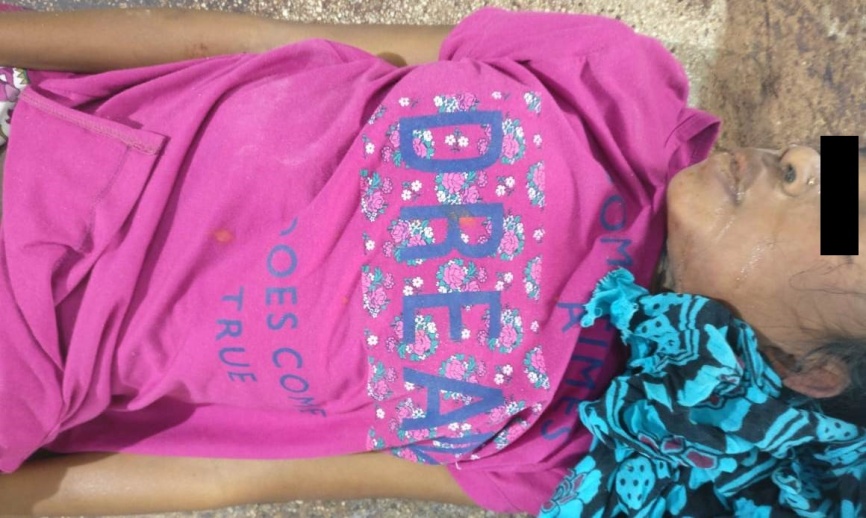 Showing the brain congested and edematous 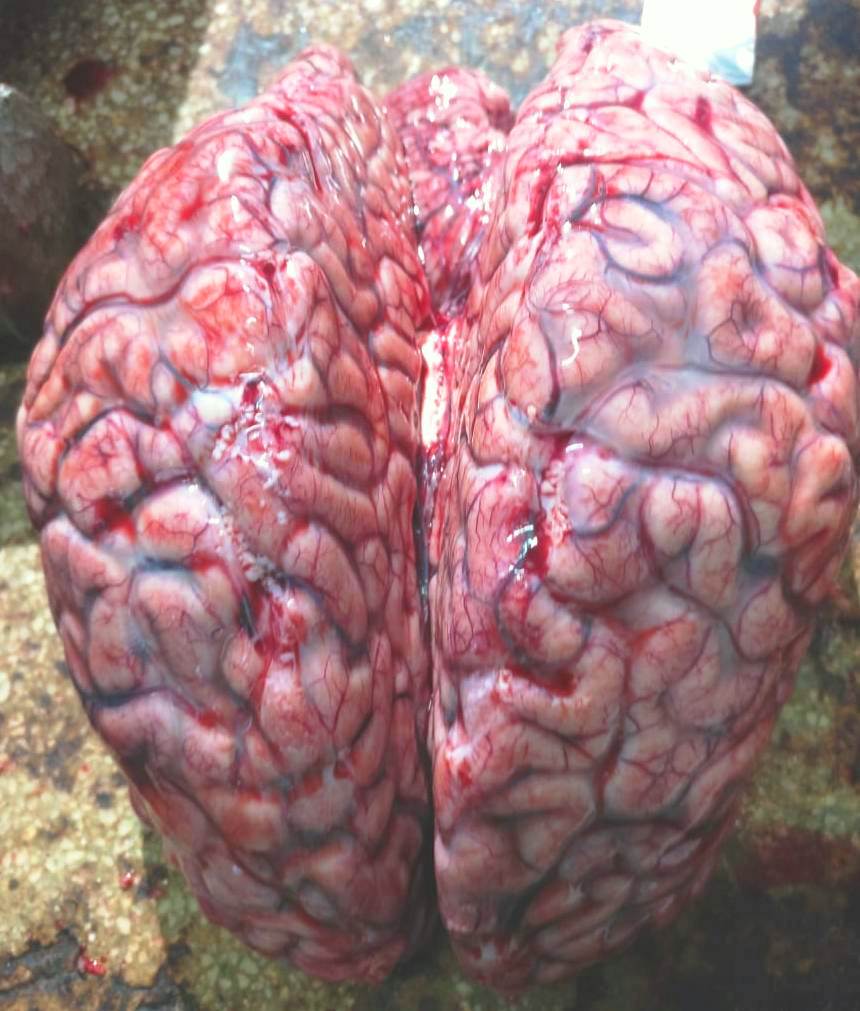 The ends of the long bones were fused. Medial ends of both clavicles were fused. Parts of body of sternum were fused but xiphoid and manubrium were not fused with the body. Hyoid bone was unfused. Cranial sutures in inner table were in process of obliteration and were not obliterated on outer table. Baciocciput was fused with basisphenoid. All the permanent teeth had erupted except third molars where retro molar space was present. The teeth showed mild to moderate grinding effect at their occlusal surface.

Scalp and skull were healthy. Meninges and brain vessels were congested, brain was congested and oedematous. Mouth, pharynx & oesophagus were intact. Larynx & tracheal mucosa was congested and lumen contained mucoid secretions. Chest wall, ribs, sternum were intact. Pleura was intact and adherent to chest wall on right side. Lungs were congested with areas of hemorrhage and consolidation. Pericardium was intact and heart contained fluid and clotted blood. Coronary arteries & large blood vessels were intact. Peritoneum was intact. Stomach contained about 50 cc of orange coloured mucoid material and gastric mucosa was congested and haemorrhagic at places. Small Intestine contained liquid chyme. Large Intestine contained faecal matter and gases. Liver was congested on cut section. Spleen was enlarged measuring 14 x 8 x 3 cm. Both kidneys were congested on cut section. Urinary bladder was empty. Uterus was in process of involution measuring 14 x 9 x 4 cm. On dissection, wall thickness was 2 cm in fundal and 0.5 to 1 cm in lower portion. Both ovaries were congested. Parts of all solid viscera and whole uterus along with adenexa preserved for histopathological examination and stomach along with parts of small, large intestine and solid organs were preserved for chemical analysis. Blood was preserved for biochemical analysis. Blood and CSF was preserved in culture bottles for microbiological examination.

Probable time elapsed between death and postmortem examination was opined as about 2 days.

Later on police moved an application seeking final opinion regarding cause of death of deceased along with the above mentioned reports and treatment record of deceased which showed basal exudates with diffused meningeal enhancement with ring enhancing lesions in left frontal lobe and calcified granuloma in CT-scan. CSF analysis was showed findings of meningitis (TLC-320/dl, Sugar-4.3/dl, Protien-87 mg/dl, ADA-13.1), After considering the above documents and reports and postmortem examination findings, it was opined that the cause of death in this case was meningitis and its complications.

The above described case was a typical example of biased and dogmatic approach of investigating authorities leading to false accusation and indictment of innocent subjects where the responsibility falls on the shoulders of forensic experts to avert such atrocity by conducting each and every autopsy with utmost vigilance and diligence. It is also pertinent to warn our fraternity of lurking risk of bias based on assumptions of investigating authorities that may creep into our scientific system.

S Hale The Discourse of Court Interpreting: Discourse Practices of the Law, the Witness and the InterpreterJohn Benjamins PublishingAmsterdam200431