Pathological findings in kidney in medicolegal autopsies: A study

Most of the chronic kidney diseases will not produce any symptoms till it reaches an advanced stage. In medicolegal autopsies most of the cases are brought with an unknown pathology. This cross sectional study was conducted to assess the gross and histopathological findings of kidney in medicolegal autopsies in the Department of Forensic Medicine and Toxicology of a tertiary care teaching institute in Imphal from 2018 to 2020. Kidney samples from a total of 170 medicolegal cases, comprising of 135 males and 35 females (M:F = 3.8:1), were examined. The prevalence of kidney findings in the present study was 77%. The commonest kidney pathology encountered was tubular necrosis (51.8%) followed by glomerulosclerosis (15.9%). Acute tubular necrosis was found more commonly in deaths due to trauma resulting in shock, haemorrhage and asphyxia. Incidental findings included a case of right solitary kidney and a rare case of right crossed fused renal ectopia. Even though these conditions of the kidneys were not directly responsible for the death of the individuals, they could have contributed to these deaths up to some extent.

Medicolegal autopsies are conducted in cases of sudden, suspicious and unnatural deaths, the primary aim being establishment of cause and nature of death. Various findings related or unrelated to cause of death may be noticed during a medicolegal autopsy. The unrelated findings though of no significance to the autopsy report do have an immense academic value. Further, it may also reveal some natural diseases, the presence of which may raise questions like association of the disease as a precipitating factor in trauma or other conditions.

Kidney functions maybe affected as the result of the following conditions: a) obstructive and vascular diseases, b) infections and inflammatory diseases, c) interstitial diseases, d) cystic diseases, e) neoplasms, etc. In some of the autopsy studies conducted in the United States, it was observed that in addition to the frequent findings of acute tubular injury and arterionephrosclerosis, a wide variety of significant renal pathology were observed over a 2 years’ span. The common conditions included diabetic nephropathy, thrombotic microangiopathy, glomerulonephritis, diseases related to underlying hematologic malignancies and toxic or metabolic tubulo-interstitial diseases.1 Further, it is also a known fact that most of the people with chronic kidney diseases will not have any symptoms as it does not usually cause problems until it reaches an advanced stage. Moreover, in medicolegal autopsies, most of the cases brought for examination are of unknown medical history. On the other hand, associated co-morbidities of the kidney may increase the risk of fatality in a trauma case.

Hence, the present study was undertaken to assess different gross and histopathological findings in the kidney as well as to determine the prevalence of kidney diseases among medicolegal autopsy cases.

This cross-sectional study was carried out in the Department of Forensic Medicine and Toxicology of a tertiary care teaching institute in Imphal after obtaining approval from the Institutional Ethics Committee during the period of 2018 to 2020. Gross as well as histopathological examination of 170 kidney samples were carried out. The data pertaining to age, sex and circumstances surrounding the cause of death were recorded from case documents submitted by the police. Gross examination findings as regards the weight, size, capsule, external surface, cut surface- cortex, medulla, renal pelvis and blood vessels were noted. For microscopic examination, two sections were taken from each kidney including the cortex and medulla in each section, and also from the sites where evidence of gross findings were present. All the histological sections were stained with H & E stain and findings were noted and the salient features studied. The findings were statistically analysed using Windows based Statistical Package for Social Sciences (SPSS) Version 21.0 (Armonk, NY:IBM corp) and expressed in term of percentages and mean.

On gross examination, external surface and capsule was normal and could be easily stripped off in 164 (96.5%) cases. In four cases the external surface showed marked granularity (Figure 1). On examination of the cut surface, dilated pelvicalyceal system was observed in three (1.8%) cases. Fatty calyx and dilated vessels were seen in two (1.2%) cases and one (0.6%) case respectively. Renal cysts (single/multiple/bilateral cysts) (Figure 2, Figure 3) were observed in 17 cases. (Table 1) 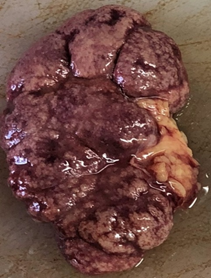 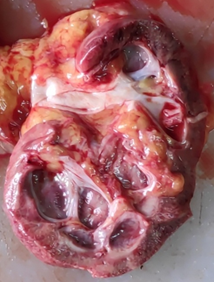 Incidental congenital findings include a solitary right kidney with absent renal tissue on the left side in a case of road traffic accident. On another instance of road traffic accident, autopsy revealed a rare case of crossed fused renal ectopia of subtype L-shaped kidney on the right side with two separate ureters and no renal tissue on the left side of the abdominal cavity. (Figure 4)

Bilateral kidneys with adherent capsule and granular external surface and cysts filled with clear fluid, in a hypertensive subject 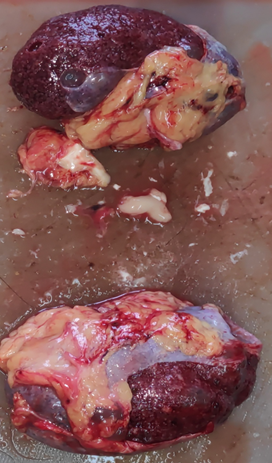 Tubular lesions included tubular necrosis (Figure 5) in 88 (51.8%) cases, interstitial nephritis in 21 (12.4%) cases, pyelonephritis (Figure 6) in 13 (7.6%) cases, tubular haemorrhage in three (1.8%) cases and tubular casts in one (0.6%). Glomerular lesions, mainly glomerulosclerosis (Figure 7) was observed in 27 (15.9%) cases. All the microscopic lesions were more in the male population as compared to the female population as shown in Table 2. 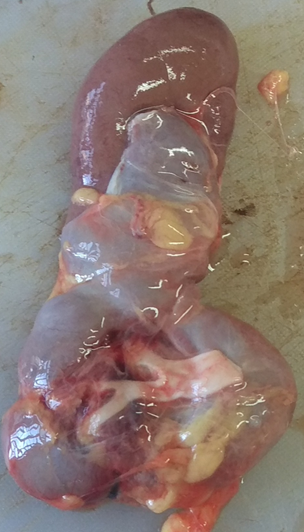 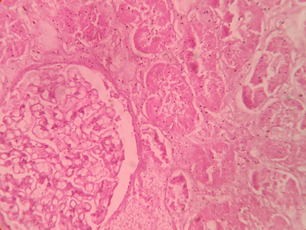 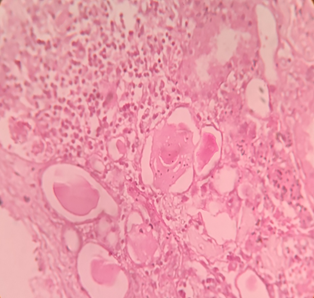 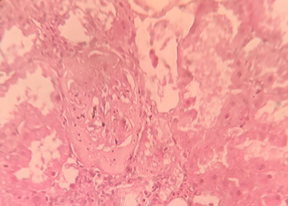 It is observed from Table 3 that maximum number of cases with renal findings were in the age group of 41 to 60 years. The four most commonly observed renal pathologies i.e. acute tubular necrosis, glomerulosclerosis, pyelonephritis and renal cyst were maximum in the 41-60 years age group compared to other age groups. Tubular necrosis, glomerulosclerosis, pyelonephritis and interstitial nephritis were seen most commonly in cases where death was due to shock, haemorrhage and asphyxia.

Distribution of renal lesions by sex in the study population. (N=170)

Mulay et al.5 and Sandhu et al6 and observed normal histology in 22% of the cases and Kaur et al. in 25% cases. In the present study, renal lesions were seen in 131 of the total 170 cases and in 39 (22.9%) cases the microscopic findings were close to normal histology.

The most common renal finding encountered in this study was acute tubular necrosis (51.8%), which is consistent with the findings of Jhajji et al.10 as majority of cases where the diagnosis of acute tubular necrosis was made were cases of trauma and poisoning. In this study, the commonest cause of death observed was shock and hemorrhage (45.53% cases) and these were mostly cases of road traffic accidents and trauma. Also cases of asphyxia were abundant in the study population. Sandhu et al.6 observed acute tubular necrosis in 12% cases and Puri et al.11 in 22.5% of cases but, these studies excluded cases where the cause of death was established during autopsy and histopathological specimen were not sent.

Incidental congenital findings include a solitary right kidney in a case of road traffic accident. In a study by Halaseh et al.,15 single kidney was seen in 4.25% of cases and was the most common congenital anomaly.

On another instance of road traffic accident, autopsy revealed a rare case of crossed fused renal ectopia of subtype L-shaped kidney on the right side with two separate ureters and no renal tissue on the left side of the abdominal cavity. In a study by Halaseh et al.,15 crossed fused kidneys was seen in seven cases (1.7%). Crossed fused renal ectopia has a reported autopsy incidence of around 1:2000 and is the second most frequently observed fusion anomaly of the kidneys with male predominance (3:2) and left-to-right ectopy being more common.16

The study demonstrated numerous incidental and interesting renal findings. Kidney samples in medicolegal cases are not routinely sent for histopathological examination in absence of any significant gross findings. It is evident from the study that the commonest pathological findings in the kidneys were acute tubular necrosis, chronic pyelonephritis, glomerulosclerosis, interstitial nephritis, renal cyst, nephrolithiasis, etc. Even though these conditions of the kidneys were not directly responsible for the death of the individuals, they could have contributed to these deaths up to some extent.