Kambar: Hypertension and its associated factors among type 2 diabetes mellitus patients in a tertiary care centre in South India: A cross-sectional study

Hypertension and its associated factors among type 2 diabetes mellitus patients in a tertiary care centre in South India: A cross-sectional study

Background: Hypertension (HTN) is a serious risk factor for cardio-vascular disease which is the leading cause of mortality among type-2 diabetes mellitus (T2DM) patients. There is insufficient data regarding prevalence of hypertension among T2DM patients. The objective of this study was to determine the prevalence of hypertension and its associated factors among T2DM patients attending the preventive diabetes clinic at KLEs Dr Prabhakar Kore Hospital, Belagavi.

Materials and Methods: An institution-based cross-sectional study was conducted from November 2019 to January 2020 done among 522 T2DM patients who presented to the preventive diabetes clinic. Data were collected using an interviewer-administered questionnaire. Written informed consent was obtained from each participant.

Results: There were 522 participants with a mean age of 49.81 ± 9.53. Three hundred and sixty-nine (70.7%) of the study participants were 40 years old and above. The prevalence of hypertension among T2DM was 57.7%. The majority (41.8%) of hypertensive patients were stage 1. Age, education status, BMI and tobacco use were signiﬁcantly associated with HTN in the multivariable analysis.

Conclusions: The prevalence of hypertension was high. Patients who are both hypertensive and diabetic are at an increased risk of cardio-vascular disease. Health screening and health promotion will ensure that the patients are prudent regarding their health.

Hypertension and Diabetes mellitus are major health threats which can present with various complications without any symptoms.1 Diabetes increases risk of life-threatening cardio-vascular disease which is worsened by hypertension. Various mechanisms such as oxidative stress, inflammation contribute to macrovascular and microvascular complications of diabetes and hypertension.2, 3, 4

Hypertension is a controllable albeit serious risk factor for many diseases and its asymptomatic nature makes it an underdiagnosed co-morbidity.11 Both hypertension and diabetes mellitus make patients liable for end organ damage in the form of cardiovascular and renal diseases.12, 13 Moreover, hypertension increases the risk of cardiovascular disease in diabetic patients.14 Determining the prevalence of hypertension among diabetes mellitus patients is worthy of attention as it aids the policy makers in providing guidelines and also in planning and allocation of important health resources to curtail the impact of both diseases. Discerning the associated factors of hypertension in diabetic patients will empower healthcare professionals to tackle the ramifications of both diseases. The objective of this study was to determine the prevalence of hypertension and its associated factors among T2DM patients attending the preventive diabetes clinic at KLEs Dr Prabhakar Kore Hospital, Belagavi.

All T2DM patients aged more than 18 years who presented to the preventive diabetic clinic at KLEs Dr Prabhakar Kore Hospital, Belagavi were included in the study. Patients who had history of hypertension before the diagnosis of T2DM, and pregnant women were excluded from the study.

Participants were explained about the study and written informed consent was obtained from each of the participants before commencing the interview. An interviewer-administered questionnaire was used to collect the data.

A poor glycemic control was considered when a patient had HbA1c >7%.16 Current tobacco consumer is a person who consumed tobacco in any form at least once in the last month prior to the date of interview.

Study participants were identiﬁed by checking for type 2 diabetes mellitus diagnosis in the medical record. When a patient has a FBG of ≥126 mg/dl, HbA1C ≥ 6.5%, or are on any form of medication for T2DM, they are considered as a diabetic patient.17

Blood pressure (BP) was recorded using a mercury-free sphygmomanometer. Two measurements were taken 10 minutes apart, and the mean value was taken. Venous blood sample were collected for FBG and HbA1c and sent to the laboratory within the hospital. FBG and HbA1c were measured using glucometer and Direct Enzymatic HbA1c Assay respectively.18 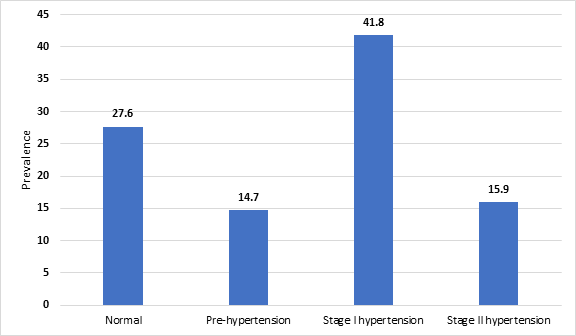 Using binary logistic regression, crude association of the explanatory variables with the outcome variable. Age, gender, educational status, occupation, BMI, and tobacco consumption were a candidate for the ﬁnal model. Age, education status, BMI and tobacco use were signiﬁcantly associated with HTN in the multivariable analysis.

The odds of getting HTN among T2DM patients increased with age. These findings were consistent with various studies done in Israel,24 Nigeria,25 Ethiopia,21, 26 Egypt,23 and Botswana.27 With increase in age, there is arterial stiffness and remodelling and suppression of vasodilators like nitric oxide which narrows the arterial wall.2, 3

The odds of developing HTN were higher in patients who were illiterate. These findings are similar to a study done by Asresahegn et al.28 One explanation could be that these patients lacked awareness regarding risk factors and complications of hypertension.

Patients with high BMI were more likely to develop HTN. This is in agreement with studies from different countries.21, 24, 26, 27, 28, 29 Insulin also acts on the vascular system by inducing vasodilation through the synthesis of nitric oxide. Insulin resistance has an important role in pathogenesis of T2DM and it also impairs nitric oxide production and vasodilation.30 T2DM patients who did not consume tobacco were less likely to develop HTN. This finding is in accordance with a study done in China.31 Tobacco contains nicotine which produces an acute hypertensive activity due to sympathetic system activation and causes arterial stiffness thereby having an unfavourable effect on blood pressure.32, 33

The most common patterns of hypertension in our study were stage 1 hypertension followed by stage 2 hypertension and then pre-hypertension respectively. These findings were similar to studies done within Karnataka state.9, 10

Our study has a few limitations. The cause-effect relationship between hypertension and independent variables could not be established since this study is cross-sectional. The findings may be less applicable to the general population as it is a hospital-based study.

Increase in age, poor education status, increase in BMI and tobacco use were risk factors for developing hypertension. Hypertension has an asymptomatic nature and health education regarding the modifiable risk factors would ensure that the patients are wary of the possible complications of both hypertension and diabetes mellitus.