Withdrawal symptoms amongst the habitual drinkers of alcohol have become a common finding during the COVID 19 pandemic as a result of lockdown. To curb the symptoms, some seek to take surgical spirit which contains isopropanol, a monohydroxy alcohol. As the mortality rate of its ingestion is very low, most of the literature is concerned with the clinical findings. Here we present autopsy findings of a couple who had consumed surgical spirit to ease the symptoms of alcohol withdrawal. On taking a history from the son we came to know about the withdrawal symptoms and previous medical treatment. They had consumed surgical spirit which they allegedly took to relieve the symptoms which had been retrieved from the house. There were no external injuries present over the bodies. The stomach showed diffuse submucosal hemorrhages. Lungs were grossly edematous and hemorrhagic. Urine showed the presence of ketone bodies. Chemical analysis of viscera showed the presence of isopropanol. Many studies pointed out that during the COVID-19 pandemic there is a surge in the withdrawal symptoms amongst the alcoholics which even had provoked them towards consumption of toxic alcohols. With limited or no access to alcoholic beverages, people tend to consume toxic alcohol to relieve their withdrawal symptoms. In these ‘hard times’ population at risk should be identified, treated, and counseled against the taking of toxic alcohols. Substitutes for alcohol-based sanitizers could be researched and put in use. A cautionary message should be boldly printed on the label of such things.

The COVID 19 pandemic ushered an era where work from home, social isolation, fear and stress have become a part of one’s life. Withdrawal symptoms amongst the habitual drinkers of alcohol are being commonly noticed.1 This leads to desperation out of which they take commonly available hand sanitizers and surgical spirits to ease out the symptoms which leads to toxicity.2 These are the common items in a house-hold now-a-days and also widely used in hospitals and industries because of their antiseptic properties.3, 4 It mainly consists of isopropanol, a monohydroxy alcohol.5 It is a toxic alcohol.6 It is a colorless liquid with a fruity acetone like smell. It is a potent Central Nervous System depressant but unlikely to cause death.5 So, most studies regarding the toxicity have been conducted in the clinical settings.4, 5, 7 Here we present autopsy findings of a couple who had ingested surgical spirit to ease out their withdrawal symptoms.

A middle aged couple was brought dead into the casualty of AIIMS, Bhubaneswar by their son. There was an alleged history of ingestion of surgical spirit which was discovered at the crime scene along with two soda bottles. Upon going through the inquest papers and dead body challan, and history provided by the accompanying person we came to know that the couple were habitual drinkers of alcohol. Since during the COVID-19 lockdown no liquor shops were open, they were having withdrawal symptoms for which they were having medical consultation. They were good financially. On the day of incident as the son reached his home, he saw his mother and father in a debilitating condition, after which he called the ambulance and brought to the hospital where they were declared as brought dead. Autopsy over the dead bodies were done on next day.

On examination there was no evidence of any external injuries. Face was congested in both the dead bodies. Conjunctiva of both eyes in both the bodies was congested. Nails were bluish. No peculiar smell was appreciated coming out of the body. 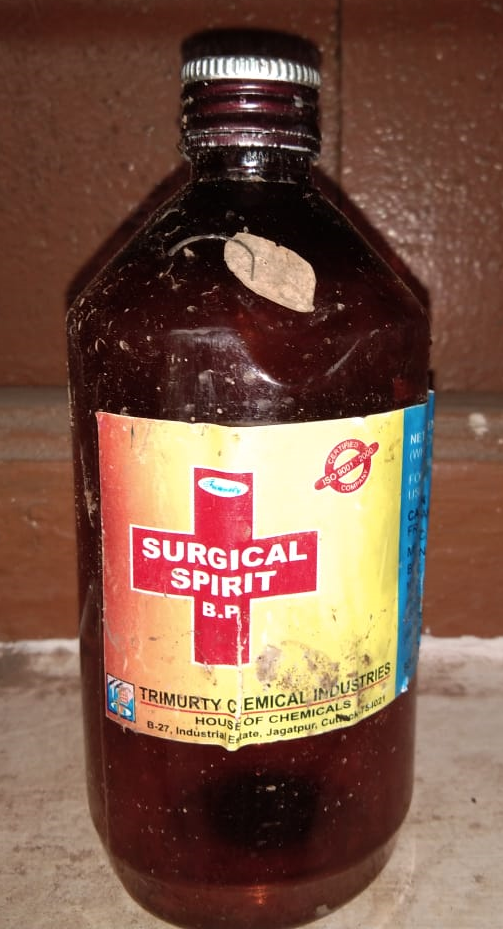 Internal examination of the stomach in both individuals revealed that mucosa was deeply congested and diffused sub mucosal hemorrhages were present. There was presence of yellowish colored fluid of 400 ml with visible rice particles in the stomach of the man. A fruity odor was appreciated coming out of the stomach contents. In case of woman, 200 ml yellowish colored fluid with visible rice particles having fruity smell was present. Small intestine of both the dead bodies contained the same type fluid as that of the stomach but in lesser amount. The mucosa was congested and sub mucosal hemorrhages were diffusedly present. Liver of both bodies was congested. Lungs of both the individuals were congested and edematous. On sectioning, blood was seen oozing out. Brains were congested and edematous. 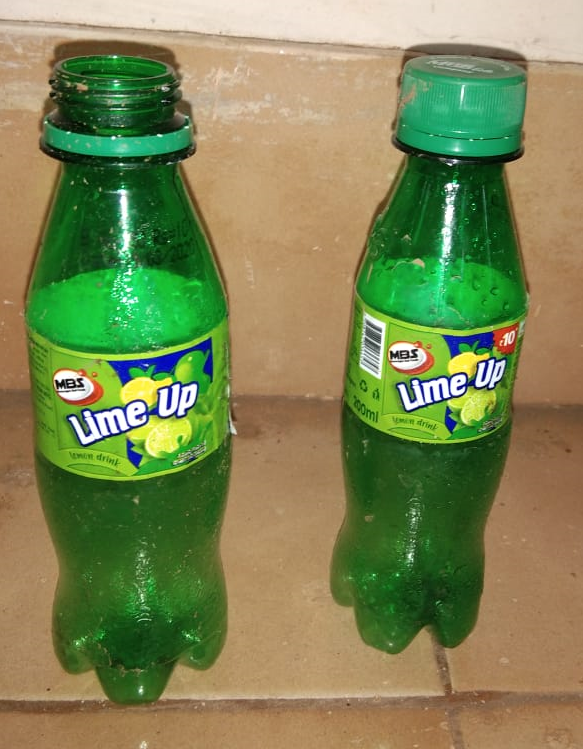 Stomach along with its contents, 30 cm of small intestine along with its contents, 500 gm of liver, half of each kidney, blood in sodium fluoride, and urine sample was sent to state forensic science laboratory for chemical analysis. Urine was sent to biochemistry department for analysis of ketone bodies. Chemical analysis of the preserved viscera showed presence of isopropanol. 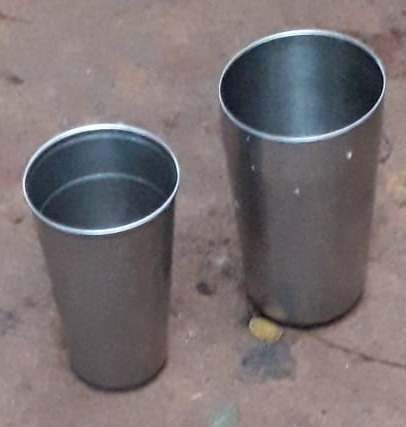 Many studies pointed out that during the COVID-19 pandemic there is a surge in the withdrawal symptoms amongst the alcoholics which even had provoked them towards committing suicide. Studies have reported that the readily available over the counter handwash and surgical spirit were the most commonly sought after commodities to relieve the symptoms. Isopropanol is two to three times more potent as a Central Nervous System depressant but rarely causes death. It presents a classical symptom of ‘ketosis without acidosis.’ Unlike seen with other toxic alcohols, alcohol dehydrogenase inhibitors play no role in the treatment of isopropanol ingestion. It is metabolized by alcohol dehydrogenase to acetone which is less toxic than isopropanol and is excreted with the help of kidneys. Blocking this metabolic pathway would slow metabolism of isopropanol leading to prolonged intoxication.

In most of cases of toxic alcohol ingestion for relieving alcohol withdrawal symptoms are observed where there is limited or no access to the alcoholic beverages, like due to unstable economy, stress factor arising out of family issues, hospital admission, etc. in our case it was a result of lockdown enforced by the authorities in the wake of the pandemic.

In these ‘hard times’ population at risk should be identified, treated and counseled against taking of toxic alcohols.8, 9 Alternatives to use of alcohol in the domestic household products should be invented and put to use. Prevention of death resulting of toxic alcohol ingestion lies in awareness and prompt identification and treatment of the cases.9 There is a need of analysis of the autopsy findings of such toxic alcohols so as to identify the compound in question and its toxicological findings and to help identify the at risk individuals. It could also be used in the clinical practice to help in the diagnosis so that treatment could be provided at the earliest.