Measuring CFR and predicting deaths across India by COVID 19 pandemic

With the ongoing global COVID 19 pandemic a lot of assessments are being made with respect to its impact in form of associated fatality due to this infection. Further many studies worldwide have been conducted proposing different case fatality rates by the same disease. The realistic assessment of the case fatality by this virus could be helpful in assessing the risk of death by this virus as well as the variations between the fatality amongst various states and UTs based upon their preparedness and deployment of measures in place to reduce the fatality. This article discusses risk of deaths in various states and UTs in view their individual case fatality rate, emphasising more focus on them.

The human death is a unique and kind of final event. When it happens whether in natural or unnatural way, always raise a question why it has been happened and when it was happened. It is also a matter of epidemiological investigation sometimes when it happens in large numbers. Measuring the death because of any reason is another form of investigation and many of the times, it guides about the fatality associated with any particular reason and also about the preparedness of the health system of any nation to impact by reducing it in terms of number of deaths.

The Case fatality rate or ratio, in epidemiology is defined as the proportion of people who die from a particular disease among all individuals who have been diagnosed with the particular disease over a certain period of time. It is calculated by dividing the number of deaths by the total number of individuals diagnosed with the disease during that time; multiplied by 100.1 This is used as a measure of the disease severity and help in finding out disease course or outcome and both are inversely proportional to each other. When there is intervention in form of treatment then it is also helpful in measuring the effectiveness of the interventions including preventive strategies like lockdown, wearing masks & PPEs, social distancing and treatment.

This study has been planned to collect the official data on sum of confirmed cases and sum of confirmed deaths to find out the case fatality rates in populations of different States and UTs of India depending upon the interplay between the COVID 19, the host, and the environment as well as available preparedness, preventive measures, treatment strategies and quality of patient care in different states and UTs to make the appropriate recommendations accordingly.

The cases are on rise day by day in all of them. Only 2 UTs viz Lakshadeep and Daman & Diu are yet to report their first case. However, in 26 states and UTs the number has already crossed the landmark of 100 confirmed cases and in 19 bigger states and UTs, even the number of confirmed cases is >1000 each. In 5 states and UTs, it has already crossed 10000 mark with the maximum of 80,229 cases reported in state of Maharashtra. When we look for sum of deaths then it was found that in almost 9 states and UTs it has already crossed 100 mark and more than 500 mark in at least 3 states and UTs with the maximum casualties reported in the state of Maharashtra followed by Gujarat and Delhi. Still in 11 states and UTs, no death has been reported (Figure 2). When we see the state and UTs wise distribution of case fatality rates then it was found that the majority of states and UTs (26) do have it as <1.70 and only 5 states viz Telangana, Maharashtra, Madhya Pradesh, West Bengal and Gujarat do have it more than 3.40. (Table 1, Figure 3, Figure 4) The sum of case fatality rate across the country is 2.81 (range as 0-6.23) per 100 cases (Figure 3). 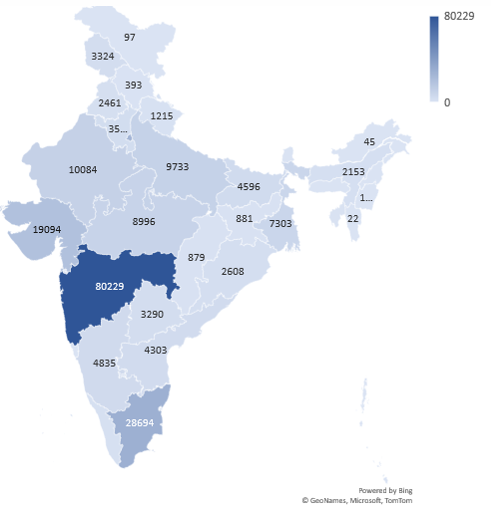 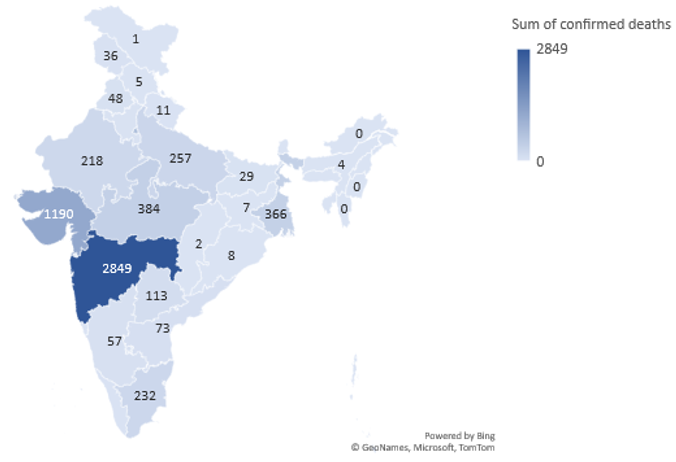 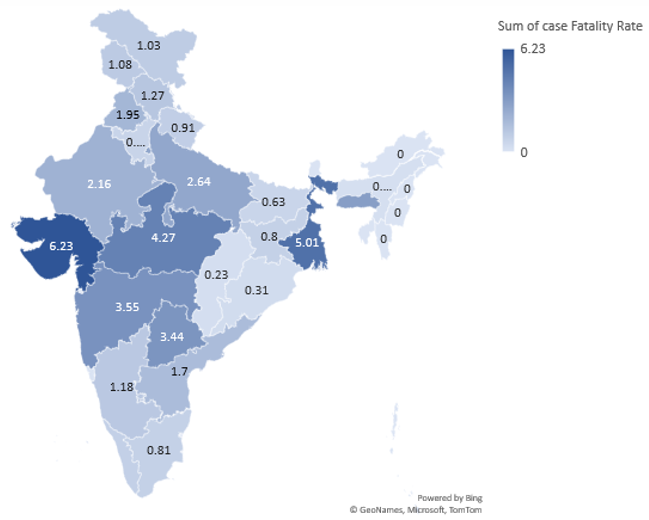 Categorisation of states/UTs on the basis of CFR

The case fatality rate (CFR) is a measure of the virulence of any infectious disease but many of the times, the incomplete reporting of cases and deaths in an outbreak, makes the accurate estimation very difficult.4 In a study, it was calculated as 2.35 and 4·03% for the data available for China6 nearby to the value of 2.81 in the present study. Apart from the asymptomatic and mild cases, the prioritized testing strategies for severe cases, change the denominator and may lead to its overestimation of CFR. A study on European population has estimated CFR between 0.82 in Norway to 10.94 in Italy.7 Although highly transmissible, the CFR of COVID-19 has been reported to be much lower than SARS (9·5%) and MERS (34·4%)2 in the present study. For COVID 19, it was reported to be 15% in the initial period but subsequently, with more data emerging, it has decreased to between 4·3% and 11·0%, and later to 3·4%8 very near to the average value of 2.81 across the country. By using, WHO data on the cumulative number of deaths to March 1, 2020, mortality rates calculated as 5·6% for China and 15·2% outside of China.9 In Wuhan, the CFR has gone down from 17% in initial phase to nearly 1% now.10 It has changed over time in countries that have had over 100 confirmed cases and calculated between 0.25% to 10%11 unlike the CFR range of present study between 0-6.23 where even the State and UTs with less than 50 reported cases across the country have been included.

It is most commonly discussed measure of the risk of dying, but it is extremely difficult to make accurate estimates of the exact risk of death. In the media, it is often talked about when the risk of death from COVID-19 is discussed.3 The total number of cases of COVID-19 is not known, as everyone with COVID-19 is not being tested in most of the states and UTs due to various reasons like limited number of testing kits available therefore rather it reflects the severity of the disease in a particular context, at a particular time, in a particular population. With the course of pandemic, the responses by the nations are changing from time to time and place to place. It means that it is now an underestimate of what it will be when the disease will have run its full course.12 With the COVID-19 outbreak, it can take between 2-8 weeks from start of first symptom to death13 which may affect the measurement depending upon at the particular time when it is done. Therefore, it was initially reported to be 3-5% during the early stages of the outbreak, but had risen to around 10% by the end.14, 15 Further, the IFR(Infection Fatality Rate) differs from the CFR in that it aims to estimate the fatality rate in all the detected as well as undetected cases16 which is more accurate measure of the infection related fatality.

Future course of outbreak in India

The number of cases and deaths tend to rise considering the current trend of the present outbreak. If this trend continues and affect at least 50% of the India’s population (Forecasted as 1,380,004,385 on 1st Jul.2020 based on Worldometer elaboration of the latest United Nations data)3 as of now, then considering average national CFR in the present study, there will be around 19,389,061 deaths in India itself unless there is some effective intervention in terms of breaking the chain of transmission, vaccine or treatment measures etc. Further, any kind of casualness may be disastrous and any figure would be unimaginable as any kind of assumption on full blown course of this disease on this 2nd populous nation of the world with large percentage of rural population, will be full of uncertainty considering large segment of unreported and asymptomatic cases.

The CFR can play a larger role in understanding public health threat and establishing the responses accordingly. Further, the accurate or realistic estimates may help in optimal allocation of limited resources with respect to surveillance, preventive measures and treatment strategies. Such realistic estimates may guide for timely and targeted interventions against the COVID 19. However, during an outbreak especially when nobody could measure the total number of cases accurately, differences in reporting, adequacy of healthcare, administrative measures in place and demographics of a nation, one has to be very careful in interpreting the CFR in terms of total number deaths. However, from the above study it may be concluded that it is particularly higher in Telangana, Maharashtra, Madhya Pradesh, West Bengal and Gujarat while in terms of total number of cases and deaths is highest in state of Maharashtra. Further, considering modest value of CFR(2.81) in India in the present study, there will be at least around 19,389,061 deaths across India if COVID 19 infects roughly about 50% of the Indian population unless there is some effective intervention in form of breaking the chain of transmission, vaccine development or discovery of some innovative treatment measures etc.

Rebecca A Harrington Case fatality ratehttps://www.britannica.com/science/case-fatality-rate(accessed on 29th May 2020)